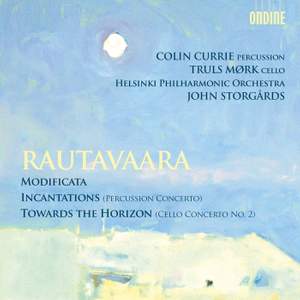 A late and lush harvest of works by octogenarian Einojuhani Rautavaara continues apace. Here we have eagerly awaited documentation of his two latest neo-Romantic concertos, in beautifully recorded... — BBC Music Magazine, May 2012, 4 out of 5 stars More…

Rautavaara: Cello Concerto No. 2 'Towards the Horizon'

II. Variations of the theme

The virtuoso Percussion Concerto Incantations (2008) features the Scottish percussion soloist Colin Currie, who is the dedicatee and première performer of this work. Currie wrote himself the virtuoso cadenza to the final movement.

Rautavaara’s Second Cello Concerto Towards the Horizon (2009) was written for cellist Truls Mørk and plays continuously in one 20-minute movement. Reviewing the premiere the Star Tribune noted that the composer “acknowledges a ‘taste for eternity’ and a vain of mysticsm runs through his work.”

Einojuhani Rautavaara is recognized as one of the most notable Finnish composers after Jean Sibelius. His recordings on Ondine have been bestsellers and garnered numerous awards (including a recent GRAMMY nomination for his opera Kaivos).

Under their chief conductor John Storgårds, the Helsinki Philharmonic Orchestra builds on long-time pedigrees of performing their compatriot’s music.

A late and lush harvest of works by octogenarian Einojuhani Rautavaara continues apace. Here we have eagerly awaited documentation of his two latest neo-Romantic concertos, in beautifully recorded and definitive performances by the soloists who are their dedicatees.