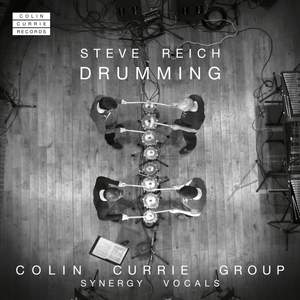 What gives Drumming (1970-71) its hypnotic allure is a sense of toppling jeopardy…Colin Currie Group’s own recording, honed through long performance practice, brings you into a magic circle where... — BBC Music Magazine, June 2018, 5 out of 5 stars More…

The pioneering classical percussionist Colin Currie launches his own record label with a recording of Steve Reich’s iconic Drumming, performed by the Colin Currie Group and released in March 2018. Colin Currie Records is a platform for the soloist’s diverse projects, celebrating the extraordinary developments for percussion music over the past century.

Drumming was the piece which launched the Colin Currie Group, a virtuoso ensemble of musicians hand-picked by Currie.

Formed in 2006 for a performance at the BBC Proms celebrating the 70th birthday of Steve Reich, the group specialises in the American composer’s work. This recording was made possible by a crowd-funding campaign, which Reich enthusiastically endorsed, saying “It will be, I am sure, the best recording of Drumming ever made!”

Dating from 1971, Drumming is an epic work for nine percussionists, two vocalists and a piccolo player, and employs Reich’s trademark phasing technique. Over four connected parts, the composer explores different instrument groups, first focusing on bongo drums, then marimbas and glockenspiels before the complete ensemble come together for the piece’s climax.

What gives Drumming (1970-71) its hypnotic allure is a sense of toppling jeopardy…Colin Currie Group’s own recording, honed through long performance practice, brings you into a magic circle where every impact is precisely heard, every overtone burnished.

These guys have a pedigree with this unfathomably difficult score and their fresh, slick recording shows it...On top, the playing is more than secure: confident, bright and delivered on the front foot...A Drumming for this decade – and probably a few to come, too.

[Quartet is] a tripartite, fast-slow-fast structure with a strikingly sonorous centre. Pulse, for violins, violas, flutes, clarinets, piano and bass, is a single span, the pulsation relentless yet relatively reticent, and even self-effacing.

This performance from the Colin Currie Group, seamlessly compiled from a studio session of 32 takes, is thunderously exciting. The recording, too, thrusts us right into the action as Currie and colleagues thwack and tinkle at varying speeds on bongo drums, glockenspiels and marimbas.