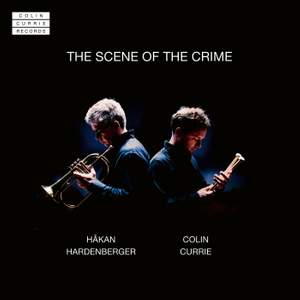 The scene of the crime

This delicate and daring performance gives a clear impression of two musicians for whom verbal communication might well be less fertile than musical. The approach, in which instruments often... — Gramophone Magazine, January 2019 More…

Jolivet: Heptade for trumpet and percussion

Interview,  Colin Currie on The Scene of the Crime

“The duo with Hakan Hardenberger is my musical safe space for maximum risk-taking. From my earliest point of connection with this most regal of musicians, what entranced me was the fearless audacity of the endeavour. Envelopes pushed, or simply reinvented, boundaries moved and canvasses recast. Rehearsals are intense; not many words spoken, a glance here or there, a certain type of breath taken, whilst the concerts are zones of feverish intensity, many-coloured and highly emotional. Too many now to pick out - San Fransisco, Seoul, Verbier, London, the Hanover concert with three World Premieres - I want to thank him for his encouragement, daring, humour and above all, friendship.” Colin Currie

Percussionist Colin Currie and trumpeter Håkan Hardenberger have earned a reputation as fearless innovators. The charismatic and virtuosic duo have performed together for over a decade, and their first album on Colin Currie Records presents four works written for the duo alongside André Jolivet’s Heptade, written for Maurice André.

The album takes its name from Brett Dean’s 2017 composition ... the scene of the crime... , which is the Australian’s homage to the pair’s skill and infectious drive, scored for trumpet, flugelhorn and drum kit. Joe Duddell’s Catch pairs marimba and trumpet in a lively, up-tempo score blurring the musical hierarchy of soloist and accompanist. Tobias Broström’s Dream Variations evokes the paintings of Swedish artist Claes Eklundh through use of sustained percussion including Java gongs, vibraphone, and dubaci. The music of Daniel Börtz is often mystical and highly emotive, and Dialogo 4 is no exception, the trumpet and percussion in partnership creating an immersive atmosphere.

Written in 1971, André Jolivet’s Heptade is the earliest work on the album, and is perhaps the archetypal 20th-century pairing of these two instruments. The late French composer’s music tasks Hardenberger with a fiendish trumpet part while Currie deftly handles a dizzying array of unpitched percussion throughout.

This delicate and daring performance gives a clear impression of two musicians for whom verbal communication might well be less fertile than musical. The approach, in which instruments often associated with brash directness sound elusively poetic and mysterious, links arms with the elegance and erudition in Jolivet’s writing…The album is captivating whether in joy or pain.