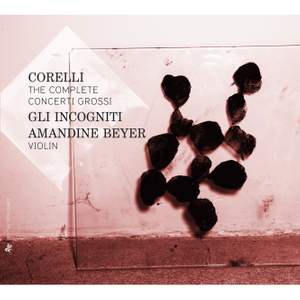 Corelli: Concerto grosso Op. 6 No. 5 in B flat major

There is nothing surprising in the fact that Amandine Beyer and her ensemble Gli Incogniti should tackle Arcangelo Corelli's Concerti Grossi, Op. 6. Indeed, the 12 concerti making up this opus represent a form of apogee of this musical genre in the Baroque era and, at the same time, testimony to the great Italian composer's exceptional talent as a violinist and conductor.

Amandine Beyer recorded these concerti in concert, at the Arsenal in Metz, France, once again demonstrating her dual talent as violinist and 'band leader', who already dazzled listeners with her recording of Vivaldi's Four Seasons and which is indispensable in performing such a cycle.

Let us wager that this recording, alternating between jubilation and meditation, and honouring the 300th anniversary of Arcangelo Corelli's death, will mark a milestone in the interpretation of these magnificent works.

Entirely devoid of contrived preciousness or formulaic complacency, this is simply magnificent.

These are elements of real character which keep everything alive and filled with novelty, without becoming wearingly mannered. All in all this is the kind of release which can solve all your Corelli Op. 6 problems in one go, and I for one don’t feel the need to seek much further to have the best from this music.