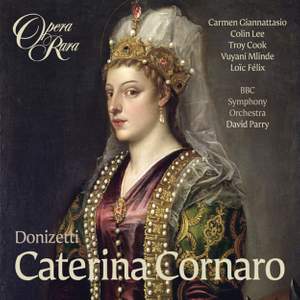 Giannattasio brings an easy confidence to the rich lyricism of the writing, though a cleaner attack on the text would stamp more personality on the role...Colin Lee is sweet and graceful...and... — BBC Music Magazine, September 2013, More…

Caterina Cornaro was written in the extremely productive last period of Donizetti's life (between Don Pasquale and Linda di Chamounix) and was the last of his operas to be premiered in the composer’s lifetime. Like every other work of this period, it is intensely original, in this case being unusually dark in both subject matter and general musical tone.

This is the only opera of Donizetti’s later period not to have had a quality modern recording. Conductor David Parry says: “The opera requires a prima donna with a wonderful voice, extraordinary technique and exceptional histrionic ability, which we have in Carmen Giannattasio: the role could actually have been written for her.

The story is resonant and believable, a woman forced into a political marriage with a king she does not love, but who turns out to be noble and good, so that she feels that she cannot abandon him, and who is assassinated at the instigation of a bitter enemy, leaving her to rule on her own. This calls up from Donizetti one of his most deeply felt, atmospheric and dramatically truthful scores. It is concise and hard-hitting, and I simply cannot understand why the opera is not in the repertoire; it is badly in need of a proper studio-recording.”

The 2CD set is accompanied by a complete libretto with an English translation alongside an article and synopsis by the eminent 19th-century musical scholar, Jeremy Commons.

Giannattasio brings an easy confidence to the rich lyricism of the writing, though a cleaner attack on the text would stamp more personality on the role...Colin Lee is sweet and graceful...and Vuyani Mlinde impresses...Parry secures a fine overall performance, drawing out the subtle drama of the piece.

Giannattasio shows once again how admirably suited she is to the bel canto repertoire. Her opening Romanza encapsulates her virtues: a good legato line wih no Sutherland droopiness, followed by an equally expressive cabaletta...I have heard Colin Lee described as 'the poor man's Florez'...he is very much more than that.

[Lee] is up to his usual high standard. His bright, high-placed voice is in fine condition...there are some meaty morsels for the middle of Giannattasio's compass, which she treats to the occasional touch of chest-voice, yet she can take upward flight with flowing ease...She completes a fine cast, in which there is now weakness.

Giannattasio brings dramatic power and infinite varieties of light and shade to the meaty title-role on this 2013 recording under David Parry, with stylish singing from Colin Lee, Troy Cook and Graeme Broadbent too.

The drama moves at a breathless pace in this first studio recording under David Parry’s seasoned baton...Giannattasio is fierce under pressure, but has the requisite “sacro fuoco” for the title role, while Colin Lee and Troy Cook offer Italianate plangency and vigour as her lover and husband.

powerhouse performances by Colin Lee (Gerardo) and Troy Cook (Lusignano), whose big duet together is very classy indeed. Carmen Giannattasio's Caterina is too detached for my taste. David Parry is the no-frills, forthright conductor.

this recording reveals an interestingly coloured voice [from Giannattasio] with some effective phrasing and efficient coloratura...Add idiomatic and spirited conducting and playing from David Parry and the BBC Symphony Orchestra and this release is well worth adding to the collection of anyone interested in nineteenth century Italian opera.