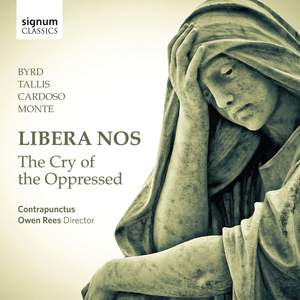 Libera nos: The Cry of the Oppressed

The ‘reconstitution’ of Tallis Libera nos as a brief choral work is very effective and the inclusion of the rich music of the 17th-century recusant Peerson is a welcome revelation… The singing... — Early Music Review, December 2013 More…

Coupling powerful interpretations with path-breaking scholarship, the choir Contrapunctus presents music by the best-known composers as well as unfamiliar masterpieces. Directed by Owen Rees, a specialist in music of the 16th and 17 centuries, the group presents imaginative programmes revealing previously undiscovered musical treasures and throwing new light on familiar works.

This recording explores the musical 'cries of the oppressed' from opposite ends of Europe, which include some of the most powerful works composed in England and Portugal during this period by Byrd, Tallis, de Monte and Cardoso. The highlight perhaps is the first recording of a newly reconstructed vocal work by Thomas Tallis, 'Libera nos'. This has long been thought to be an instrumental work, and has been recorded as such, but there's persuasive historical evidence for us to be confident that this is in fact a choral setting of the antiphon 'Libera nos', and it is performed here with the relevant text restored to the five vocal parts.

The ‘reconstitution’ of Tallis Libera nos as a brief choral work is very effective and the inclusion of the rich music of the 17th-century recusant Peerson is a welcome revelation… The singing of caprapunctus is very beautiful through-out and, essentially for this impassioned repertoire highly expressive and powerful.

The familiarity of Contrapunctus with this repertoire will come as little surprise. There is considerable security and confidence in their interpretations...A recital better dipped into than taken in at a sitting; but, at its best, intriguing and rewarding on its own terms.

The results are impressive indeed… The three Portuguese works, by Cardoso and Pedro de Cristo, provide very interesting company for the English pieces not only for thematic reasons but for their stylistic differences and similarities… The sound of the ensemble is in general rounded and well blended… The choir’s sound is beautifully captured by Signum’s teams.

Contrapunctus was founded in 2010 and this is their first disc. They could hardly have made a better debut. The singing is superb: the voices are beautiful and their blending is perfect, without ever losing their individual character...The texts may not spread happiness but the singing can hardly fail to please.

This debut recording by the clean-voiced and agile Contrapunctus ensemble includes a genuine discovery, perhaps expected when scholar/conductor Owen Rees is in charge...More, please.