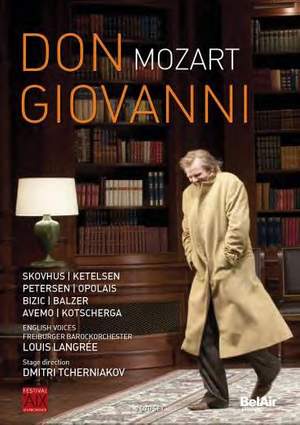 Tcherniakov's reading gives depth to a drama too often tripped up by creaking period theatrical conceits...Skovhus is electrifying in the lead role as he pivots from roaring malevolence to whispered... — BBC Music Magazine, November 2013, 5 out of 5 stars More…

More than two centuries after its creation, the emotional pull of this supreme opera remains absolutely intact. Dmitri Tcherniakov duly revisits the myth and makes the seducer of Seville a ‘man without qualities’, a cipher whose words have a hypnotic power over women. His words will disrupt the proprieties ruling the Commandatore’s family. His words are also what makes Don Juan such a subversive figure and the embodiment of one of the most powerful modern European myths.

Leading the Freiburg Baroque Orchestra is one of the best Mozart conductors, Louis Langrée. Bo Skovhus portrays a dispirited Don Giovanni, old playboy and anti-hero. Kyle Ketelsen is his servant Leporello, currently a shoe-in for this rôle.

Tcherniakov's reading gives depth to a drama too often tripped up by creaking period theatrical conceits...Skovhus is electrifying in the lead role as he pivots from roaring malevolence to whispered fragility...The Freiburg Baroque Orchestra under Louis Langree articulates extreme states of mind latent in Mozart's score...This DVD is a must-see.

The singing is good, and the acting is so accomplished that you feel you are watching 'real life' rather than 'a performance'. The orchestra plays well. If Louis Langree's conducting lacks tenderness, it certainly accords with this very unjocular interpretation of da Ponte's dramma giocoso...Tcherniakov has more knowledge than understanding.

The recitative to ‘La ci darem la mano’ and the duet itself are played and sung introspectively, slowly, convincing once Giovanni is sincere. It is among the most effective passages in the show...Petersen is not a deliverer of tremendous volume but has the necessary flexibility with a brightness at her vocal core.

It's beautifully performed – Skovhus has done nothing finer – and there's an outstanding Ottavio, morally implacable rather than dithering, in Colin Balzer. But the narrative remains Tcherniakov's rather than Mozart's