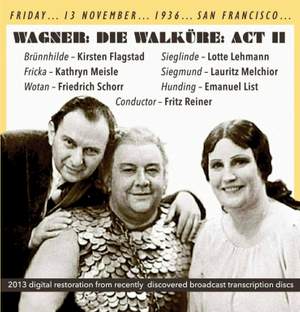 With Kirsten Flagstad as Brünnhilde, Lotte Lehmann as Sieglinde, Kathryn Meisle as Fricka, Lauritz Melchior as Siegmund, Emmanuel List as Hunding, Conductor, Fritz Reiner, San Francisco, 13 November, 1936. First released by our predecessor organization, educational Media Associates of America, Inc., in 1976 on LP-426, this recording was subsequently reissued in a restoration by Maggi Payne in 1999 as Music & Arts CD1048, and was newly restored for the present edition in 2013 from recently discovered NBC transcription discs by Ward Marston and Aaron Z. Snyder.

William Youngren wrote of the previous CD issue in Fanfare magazine: ”Reiner conducts with verve; Flagstad is splendid throughout; Lehmann is in good form, but occasionally overacts; Meisle is powerful and convincing; Schorr sings well but sounds old and fluffs a few notes; Melchior is superb - he and Flagstad make the Todesverkündigung scene alone worth the price of the disc.“