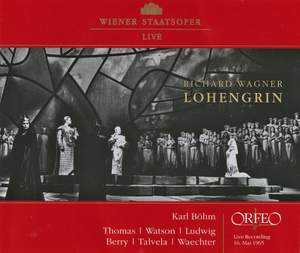 For a performance of 'Lohengrin' to be completely successful, it depends largely on the evil couple who stand opposed to the Swan Knight and the girl he protects, Elsa. The 1965 production at the Vienna State Opera was acclaimed for its musical aspects, and on its opening night Christa Ludwig as Ortrud made evident why Wagner himself described this character as “terribly magnificent”. Christa Ludwig celebrates her 85th birthday on 16 March 2013, and with her interpretation of roles such as this she secured for herself a place in the annals of the Vienna State Opera. Her curse ('Entweihte Götter!') was accorded spontaneous ovations by the audience and the subtlety that she brings to this role, straddling as it does the range of a dramatic soprano and a dramatic mezzo, makes this sorceress the undisputed manipulator of the action. All this can be heard clearly, on this live recording. With the dramatic baritone Walter Berry as Telramund, she had a partner on that evening whose vocal power was hitherto largely unsuspected, yet who offered no less vocal sophistication. Overall, the performance on that evening was stormier and more agitated than many a more 'ethereal', enraptured version such as one often hears. It was driven by Karl Böhm at the helm of the orchestra of the Vienna State Opera, and with a State Opera Chorus that had been excellently prepared by Wilhelm Pitz. Eberhard Waechter as the Herold and Martti Talvela as King Heinrich were powerfully resplendent, while Claire Watson as Elsa and Jess Thomas as the title hero formed the 'good' couple, rounding off this superb cast with their bright tone colours. Her voice, schooled in Mozart, was slender and clear in focus, while his virile tenor, clear in accentuation and in diction, offered a model of the Wagner style of the 1960s that also dominated in Bayreuth: as was preferred by the director, Wieland Wagner. This 'Lohengrin' offered a modern reading in the best sense of the word, allowing the characters their mythical grandeur while at the same time letting them approach the contemporary audience as men and women of flesh and blood.

Claire Watson excels her studio performances, singing Elsa with floods of pure tone that rarely falters...[Ludwig's] 'Entweihte Götter!' literally stops the show...Waechter makes a keen Herald, and the chorus is on good form...manna for Böhm admirers.

It must be said straight away that there are cuts aplenty..., that the radio sound is not great to begin with and that interventionist remastering has not helped. If you are allergic to all that and to generous portions of stage noise...look elsewhere. If you aren't this might be the most thrilling performance of the opera yet put on disc.

Ludwig and Berry are a formidable team and they do much to convince me that this is unmissable… The whole of this Vienna performance has a unity of purpose and concentration that makes it special- no surprise given Bohm’s gifts as a Wagner conductor. His direction is intensely dramatic and never lingers, but nor does he hustle the music which is very well played. The whole experience is spellbinding.

The most interesting contrast, and the factor which impels this release, is the conducting of Karl Böhm...he prefers fast tempi, and this drives the drama along at an exciting pace...Thomas is on top notch form here and he sounds sensational in his farewell to the swan in the first act...Watson is also on her very finest form as Elsa..The dramatic temperature of the whole set rises when [Ludwig] enters

Recorded live in Vienna in 1965, this is probably my desert-island Ludwig recording. She drips contemptuous sarcasm at Telramund (sung by her real-life husband Walter Berry), is frighteningly plausible in her solicitous dealings with Claire Watson's Elsa, and literally stops the show with a blood-curdling 'Entweihte Götter' - the thunderous applause lasts almost as long the Curse itself.

This is real edge-of-your-seat stuff...The vocal honours go to Walter Berry and Christa Ludwig, formidable, genuinely sinister – and in Ludwig's case literally show-stopping – as Telramund and Ortrud. Jess Thomas is the glamorous-sounding hero...The mono sound is clean and clear.