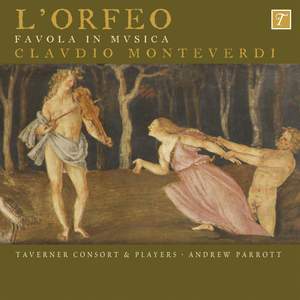 Daniels is magnificent in the title role - technically brilliant...impassioned...and lyrically supple...The rest of the cast is also good...Faye Newton is a pure and effective Euridice...As one... — BBC Music Magazine, September 2013, 4 out of 5 stars More…

Celebrating their 40th anniversary, Andrew Parrott and his Taverner Consort & Players offer a magnificent recording of the world's first operatic masterpiece, Monteverdi’s L’Orfeo. Befitting such an outstanding recording, the 2-CD set is luxuriously packaged with extensive notes and the complete libretto with English translations in a 52-page booklet.

Andrew Parrott and the Taverner Consort & Players celebrate their 40th anniversary with a marvellous recording of the world's first operatic masterpiece, Monteverdi's L’Orfeo. As can be expected from Andrew Parrott, who has been at the centre of the early and baroque music scene for over four decades, his meticulous research results in a performance and stylistic approach that brings a fresh perspective to the myth of love lost and found through the art of music. His scholarship, combined with the collaborative nature of the Taverners, translates into a performance brought to life by the finest singers and instrumentalists in the early music world, including tenor Charles Daniels who is the superb Orfeo.

Daniels is magnificent in the title role - technically brilliant...impassioned...and lyrically supple...The rest of the cast is also good...Faye Newton is a pure and effective Euridice...As one may expect from Andrew Parrott, the instruments are very adroitly deployed and controlled.

We can hear Parrott's approach most clearly in Orfeo himself...Daniels reserves his emotional outbursts for a very few key moments...In the same vein, Emily van Evera does the tricky Messenger scene with chilling simplicity...'Possente spirto' - the highlight of the work - is a triumph...I'm not sure whether I'm more impressed by [Daniels's] techique of his formidable subtlety.

Charles Daniels gives a sensitive and intimate portrayal of the part of Orfeo. Under Parrott’s direction, the first-rate team of instrumentalists further enrich our experience in a shapely reading of a still lovely, still fresh masterpiece.

the presentation is faithful to the original small-scale salon performances, which were more like poetic oratorios than grand opera. Thus, colourful singing is eschewed in favour of an almost spoken-sung recitative, with comparatively undemonstrative accompaniment from sparse instruments

This new version of Monteverdi's Orfeo is thoroughly researched and reimagined...a gentle, lyrical vision of a miraculous opera.

with Charles Daniels and Faye Newton superb as Orfeo and Euridice, and sensual singing and playing, this is the most beguiling Monteverdi opera recording for years.