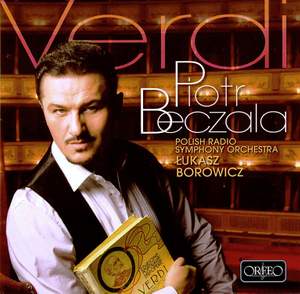 The Polish tenor's move into a heavier repertoire than hitherto associated with him is amply vindicated in this celebratory CD...he retains the golden quality of his voice as he sizes up. The... — BBC Music Magazine, July 2013, 5 out of 5 stars More…

The internationally renowned tenor Piotr Beczala celebrates the 200th anniversary of Giuseppe Verdi’s birth with a collection of highlights that include roles in which he has been acclaimed on the world’s great operatic stages. This new CD with Beczala and the Polish Radio Symphony Orchestra under Lukas Borowicz includes roles for which he is rightly famous, such as the Duke in 'Rigoletto' or Alfredo in 'La traviata' (at the Met, Covent Garden and at the Bavarian State Opera), alongside rarities and arias that were ground-breaking at the time. Thus he sings Radamès’s opening aria from 'Aïda', striking the balance between drama and expression that makes this romance as charming as it is difficult. In 'Il trovatore'. Beczala does not just sing “Ah sì, ben mio” , but also his big scene with Azucena from the second part of the opera. His partner here is Ewa Podles whose dark yet brilliant contralto voice offers a fascinating contrast to Beczala’s ever-radiant, well-focussed tenor.

In arias from 'Macbeth' and 'Un ballo in maschera' in particular, Beczala shows why he has become synonymous with the protagonist, Riccardo, since his spectacular debut at the Lindenoper in Berlin. He changes genre for the “Ingemisco” from Verdi’s Requiem. Variety is also guaranteed by the selection of tenor arias from rarely performed Verdi operas such as 'Les vêpres siciliennes' and 'I Lombardi', in which Piotr Beczala once again demonstrates the lissom elegance of his phrasing.

The recording closes with the friendship duet from 'Don Carlo', which Beczala crowns with a superb top C. Here, he is partnered by baritone Mariusz Kwiecien as Posa, whose vocal timbre adds luxury to the casting.

The Polish tenor's move into a heavier repertoire than hitherto associated with him is amply vindicated in this celebratory CD...he retains the golden quality of his voice as he sizes up. The result is singing on a grand scale, impeccable in diction, tone and musicianship.

both enjoyable and impressive… [Podles] sounds thrillingly elemental, with rich tone, dramatic flair and an almost glutinous relish of the vowel sounds. Beczala has enough metal in his instrument but retains the capacity for elegance.