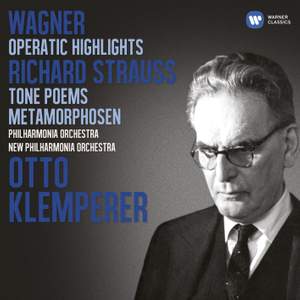 this set proved to be a most enjoyable listening experience, both in the recordings which I remembered from their original LP issues and those I had not previously encountered. The re-mastering... — MusicWeb International, 20th June 2013 More…

Wagner: Träume (No. 5 from Wesendonck-Lieder)

This collection sees Otto Klemperer lead the Philharmonia and New Philharmonia orchestras in compelling performances of works by Wagner and Richard Strauss. The set features highlights from each of Wagner’s most acclaimed operas, as well as Strauss’s Don Juan and a 1962 account of Tod und Verklärung that was hailed as one of Klemperer’s finest late recordings.

Ambivalent is the word which best describes Klemperer’s feelings about Germany’s two great musical Richards, Wagner and Strauss. During his early years as an opera conductor in Germany, Klemperer conducted a modicum of Strauss and a good deal of Wagner, though from the outset it was clear that he was never going to be an unthinking fan of either. The music of both composers did, nonetheless, cast its spell. Recording Act 1 of Wagner’s Die Walküre in London in 1969 was, he said, like meeting a woman he had loved 40 years ago and discovering that she was much as she had always been. He went on: ‘I find the music thrilling. Thrilling! One can say this or that about Wagner, but no one else could have written that music. No one! It’s as stupid to underestimate Wagner as it is to overestimate him. He doesn’t need either’.

Klemperer’s attitude to the operas of Richard Strauss was no less mixed. He thrilled to Salome, which even as an old man he considered to be one of the twentieth century’s most original scores, revered Elektra, and took great delight in Ariadne auf Naxos. On the other hand, he found too much ‘sugar-water’ in Der Rosenkavalier and was baffled by Die Frau ohne Schatten of which he conducted a handful of performances in Cologne in 1919.

The Strauss work which had first impressed Klemperer – he was 15 at the time – was Tod und Verklärung. What struck the young enthusiast was the quality of the orchestration and the remorselessness of the build-up of the thematic material, qualities Klemperer would later bring to his own reading of a work which does indeed advance implacably towards its sought-for goal: the soul’s transfiguration as memories of childhood visions and unattained artistic ideals grandly mingle.

Knowing the man as he did, Klemperer experienced few difficulties in coming to terms with Strauss’s equivocations during the Nazi era. As the Second World War drew towards its close Strauss began working on Metamorphosen, a threnody for 23 solo strings born of the trauma of wartime cultural loss: the Goethe house destroyed, Dresden, Munich, Weimar all in ruins. ‘Basically quite nice’ was Klemperer’s laconic

comment on the piece, yet no one was more eager to conduct it, an ambition he realised in Budapest in March 1948. Klemperer’s coupling of Metamorphosen with Tod und Verklärung on an LP first released in 1962 was widely welcomed as one of the finest of all his late recordings.

this set proved to be a most enjoyable listening experience, both in the recordings which I remembered from their original LP issues and those I had not previously encountered. The re-mastering has plenty of body and faithfully reproduces the sound of the original sessions and Klemperer’s approach to the music.