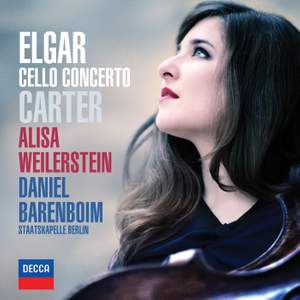 Weilerstein avoids nostalgia [in the Elgar] and produces instead an account that is full of passion, grief and nobility of feeling...Her interpretation [of the Carter], at once remarkably expressive... — BBC Music Magazine, February 2013, 5 out of 5 stars More…

Recording of the Week,  Elgar & Carter from Alisa Weilerstein

The American cellist worked closely with Carter (who died last year) whilst preparing his 2001 Cello Concerto, and brings a touching elegiac lyricism to the Japanese-influenced slow movement; her introverted and tender account of the Elgar is no less engaging.

The much-anticipated album from a brilliant young American cellist marks one of the most exciting Decca Classics debuts in many years.

The conductor Daniel Barenboim has been a fervent supporter of Alisa Weilerstein’s extraordinary talent since he accompanied her in Elgar’s Concerto as part of the 2010 Europa Concert in Oxford, broadcast on TV across Europe. Together, they have made a recording of searing intensity.

Elgar’s Concerto is paired with a contemporary masterpiece by the doyen of American composers, the late Elliott Carter, who passed away on November the 5th at the age of 103, whose work has often been championed by Barenboim.

Weilerstein avoids nostalgia [in the Elgar] and produces instead an account that is full of passion, grief and nobility of feeling...Her interpretation [of the Carter], at once remarkably expressive and a continuous display of headlong, high-pressure virtuosity, seems to me to outrank the existing recorded versions...a thoughtfully-constructed and thought-provoking programme.

Her Elgar is not as wayward as du Pre...but it's still remarkably impressive...[in the Carter] Weilerstein, who starts on her own, as in the Elgar, brings the same immaculate tonal control to bear...Kol Nidrei is a fine vehicle for Weilerstein's gorgeous tone.

Very ably accompanied, it is very much Weilerstein’s ascendant star which will sell this performance [of the Elgar] to you...[the Carter] is indeed a work which demands focus to appreciate, but the flow of the music has its own sense of inevitability and architectural logic, and there are plenty of magical moments to prickle the senses.

Technically Weilerstein is flawless throughout...what a fine work [the Carter] is! Carter’s ear for sonorities and harmonies is endlessly inventive, but what surprised me was how lyrical the work is: he really enables Weilerstein to show off the cello’s capacity for beautiful, elegiac phrases.

This is a precious disc, and certainly not in the pejorative sense. Weilerstein plays with robust vigour, but a heart-stopping moulding of phrase. She brings to the Elgar concerto... a portamento beautifully judged and asserted in a brand-new, old-fashioned way (no contradiction!).

To hear an orchestra with such a distinctive central European sound playing Elgar, and relating his music so securely to the wider late-romantic tradition, is one of the disc's great pleasures. Weilerstein's approach is impressively bold and big-boned, even if she seems – for now – more comfortable with the concerto's rhetoric than its intimacy

within the first seconds [of the Elgar], we know that Weilerstein speaks with her own voice. The muscular bowing, the sound’s depth and warmth in the opening bars: you couldn’t ask for a more characterful beginning...[The Carter] might seem as removed from Elgar as the man in the moon. Not so...with Weilerstein giving her heart and soul to Carter’s constantly evolving filigree line we’re always aware of the concerto’s singing voice.

Excerpt from the Elgar Cello Concerto