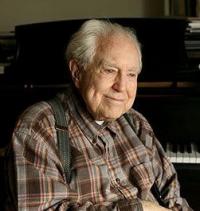 Elliott Cook Carter Jr. was an American modernist composer. One of the most respected composers of the second half of the 20th century, he combined elements of European modernism and American "ultra-modernism" into a distinctive style with a personal harmonic and rhythmic language, after an early neoclassical phase. His compositions are known and performed throughout the world, and include orchestral, chamber music, solo instrumental, and vocal works. Carter was twice awarded the Pulitzer Prize.

Born in New York, he had developed an interest in modern music in the 1920s.

Recording of the Week,  Elgar & Carter from Alisa Weilerstein

The American cellist worked closely with Carter (who died last year) whilst preparing his 2001 Cello Concerto, and brings a touching elegiac lyricism to the Japanese-influenced slow movement; her introverted and tender account of the Elgar is no less engaging.