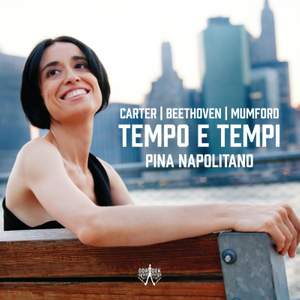 Discs like this are vital, reminding us of the importance of music today as well as referencing earlier epochs, reframing works we thought we knew so well. The recording, in itself a work of... — Fanfare, Nov/Dec 2020 More…

II. A celebration of Elliott

Following the acclaim that has greeted each of her Odradek releases, Italian pianist Pina Napolitano brings her exceptional intellect and musicality to the works of Elliott Carter and, in his 250th anniversary year, Beethoven.

Pina Napolitano is celebrated for her ability to find intricate connections between composers of different eras, as demonstrated in her previous release, 'Brahms the Progressive', in which she found the relationships between Brahms and the composers of the Second Viennese School.

In 'Tempo e Tempi', Pina Napolitano traces patterns of connection between Carter and Beethoven, composers whose music exhibits both power and playfulness, combining taut structures with the freedom of fantasia.

'Tempo e Tempi' (Time and Times) takes its name from a poem by Eugenio Montale set to music by Carter in a song cycle of 1998-99. The poem encapsulates two central aspects of this album: the relationships between different superimposed musical times, independent but proportionally interrelated, so important to Carter's music, and the relationship between historical times, which makes possible the 'meeting' between these two composers from different epochs.

Like Carter, Beethoven combines the rigours of a strong structural background on this recording with elements of fantasy.

Discs like this are vital, reminding us of the importance of music today as well as referencing earlier epochs, reframing works we thought we knew so well. The recording, in itself a work of art, fully supports the intent, while the disc presentation is impeccable. Bravo, as they (probably) say in Pescara.

His gloriously abstruse, fearsomely virtuosic Night Fantasies — brilliantly executed — and the late diptych Two Thoughts About the Piano are interleaved with the two last sonatas by Beethoven in another assertion of multiple time streams. Vividly recorded, the latter accounts are vigorous yet precisely pointed; and a little Carter tribute by Jeffrey Mumford follows.