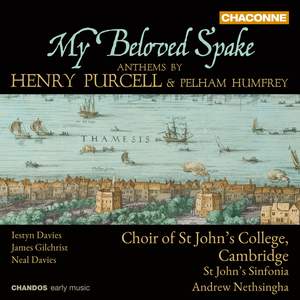 The warm continental sound of the boys' voices might sometimes bestow an unexpectedly 'foreign' accent on this music (albeit shot through with imports from France and Italy), but the commitment,... — BBC Music Magazine, February 2013, 4 out of 5 stars More…

Purcell: Rejoice in the Lord alway ('The Bell Anthem'), Z49

Established in the 1670s, the Choir of St John’s College, Cambridge is today one of the finest college choirs in the world, known and loved by millions for its recordings and concert tours. On this album, the Choir and St John’s Sinfonia, conducted by Andrew Nethsingha, perform works by Henry Purcell and Pelham Humfrey. They are joined by four soloists: Iestyn Davies, James Gilchrist, David Stout, and Neal Davies.

Humfrey was an English composer of the seventeenth century, known mainly for his verse anthems. Being well travelled, he produced works that in their vocal character show the influence of Italian music, and in the instrumental writing that of French music. That said, from these major foreign influences Humfrey forged a personal style that is uniquely English. Although as a composer he was generally forward-looking, his music also shows sub-elements of the English Golden Age of yesteryear. O Lord my God, for instance, is influenced by John Dowland’s celebrated Lachrimae Pavan of almost eighty years earlier.

In contrast, the Magnificat and Nunc dimittis were composed simply to be liturgically appropriate, with a text setting that is naturalistic and direct. Humfrey died at the age of twenty-seven, but even at this young age, he exerted a strong influence on his peers, including Henry Purcell, who as a young boy sang treble in Humfrey’s Chapel Royal Choir.

The works by Purcell recorded here range from works written when the composer was in his teenage years (Jehova, quam multi sunt hostes mei being a masterly example) to the crowning glory of the recording, O sing unto the Lord, which Purcell wrote when he was in his thirties, and compositionally on fire. At this stage of his career no other composer could touch him. Instruments and voices sing from the same hymn sheet, form and content are inseparable, past and present musical styles seamlessly intermingle, technique and virtuosity are indistinguishable from each other – and soloists and choir mesh together in a dazzling and life-affirming way.

The warm continental sound of the boys' voices might sometimes bestow an unexpectedly 'foreign' accent on this music (albeit shot through with imports from France and Italy), but the commitment, intensity and lucidity compels. And Nethsingha has assembled a formidable team.

It is nice these days to have a chance to hear some of Purcell's church anthems sung by a choir of boys and men...It is in integrated works such as O Lord my God, where the expressive urgency of this choir's soloists can rub off, that the choir is at its best; less successful are the more patchwork pieces

Nethsingha juxtaposes such relatively unfamiliar fare with masterpieces including O Sing unto the Lord. He is a committed custodian of the Oxbridge choral tradition, as are his fine soloists