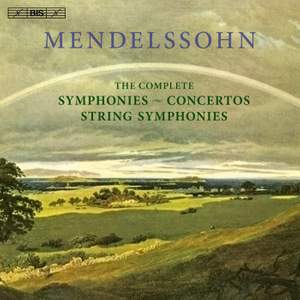 Mendelssohn: String Symphony No. 10 in B minor

Sinfonia No. 5 in B-Flat Major, MWV N5: I. Allegro vivace

Sinfonia No. 8 in D Major, MWV N8 (version for orchestra): I. Adagio - Allegro

Piano Concerto in A Minor, MWV O2: I. Allegro

Double Concerto for Violin and Piano in D Minor, MWV O4: I. Allegro

Mendelssohn: Serenade and Allegro giocoso, Op. 43, for piano and orchestra

Mendelssohn: Concerto in E major for Two Pianos and Orchestra

Mendelssohn: Concerto in A flat major for Two Pianos and Orchestra

The symphonies were recorded in 2007 and 2008 by Andrew Litton and the Bergen Philharmonic Orchestra and were warmly received by the reviewers when they were first released.

The 12 string symphonies give us the background to the symphonies for full orchestra, written by a boy not yet fifteen. The recordings are from the Amsterdam Sinfonietta conducted by Lev Markiz.

A further four discs offer all of the eight concertos that Mendelssohn composed. These include the youthful works with string orchestra accompaniment (concertos for violin, piano, violin and piano, and for two pianos), as well as the mature works for violin, piano and full orchestra, performed here by Isabelle van Keulen and Ronald Brautigam.