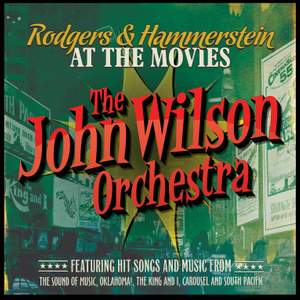 Rodgers & Hammerstein at the Movies

the endless counter-melodies, orchestral details and underlying motifs that Wilson teases out really do throw the scores into glorious technicolour...The other great pleasure of the disc is the... — Katherine Cooper, Presto Classical, 29th October 2012 More…

Rodgers, R: O what a beautiful morning (from Oklahoma!)

Rodgers, R: ''People Will Say We're In Love'' from Oklahoma!

Rodgers, R: June Is Bustin’ Out All Over (from Carousel)

Rodgers, R: ''Overture'' from The King and I

Rodgers, R: ''Main Title and Preludium'' from The Sound of Music

Rodgers, R: ''I Have Confidence" from The Sound of Music

Recording of the Week,  Rodgers & Hammerstein at the Movies

John Wilson and his orchestra are joined by a stellar line-up of soloists including Maria Ewing, Joyce DiDonato and Anna Jane Casey for a programme of hits from South pacific, Carousel, The Sound of Music and others, given in their glorious technicolour film orchestrations.

John Wilson and His Orchestra have become a regular highlight at the BBC Proms, selling out faster than any other proms and bringing the house down each time. Their second appearance in 2010 was A Celebration of Rodgers & Hammerstein which is recreated on EMI’s second release with the John Wilson Orchestra.

the endless counter-melodies, orchestral details and underlying motifs that Wilson teases out really do throw the scores into glorious technicolour...The other great pleasure of the disc is the diverse line-up of vocalists and the aptness of the casting...as with everything else Wilson has an instinctive feel for the ‘right’ sound...this life-affirming disc is a guaranteed mood-lifter!