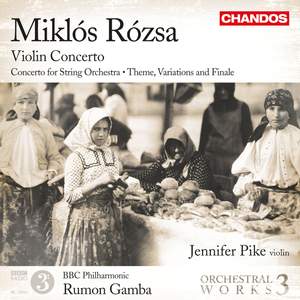 Pike immediately evokes memories of Heifetz with her silver purity of sound and quicksilver agility, inflected by a narrow, medium-fast vibrato. What sets her apart, however, is the gentle cushioning... — BBC Music Magazine, Christmas 2012, 5 out of 5 stars More…

This is Volume 3 in our series of orchestral works by Miklós Rózsa. The composer’s unique musical voice was highly influenced by his Hungarian roots, and his works often dazzle with virtuosity. The BBC Philharmonic and Rumon Gamba here pull out all the stops to play these works with the precision and passion they require. Jennifer Pike, an exclusive Chandos artist, joins them in the Violin Concerto.

The Theme, Variations and Finale was completed in Paris during 1933. The initial idea, a melancholy oboe theme, came to Rózsa as he was leaving Budapest to settle in Paris. He had made his farewells to his family – it was the last time he would ever see his father – and the somber occasion no doubt left its mark on this work. Premiered by Charles Munch in Duisburg in 1934, the work proved so successful that it was quickly taken up by Bruno Walter, Eugene Ormandy, and Leonard Bernstein.

The Concerto for String Orchestra was composed in New York during 1943. Rózsa had just completed his score for Rudyard Kipling’s Jungle Book and felt the need to write something non-cinematic; this Concerto was the result. The underlying theme is muscular, brutal, and aggressive: no doubt a reflection of a world in the midst of war.

Every year Rózsa would take a three-month holiday from the film studios in order to compose music for the concert hall. The Violin Concerto was written in 1953, during one such break, for the violinist Jascha Heifetz, who collaborated with the composer on details of it. About seventeen years later, Rózsa adapted the work for his soundtrack to the film The Private Life of Sherlock Holmes.

Pike immediately evokes memories of Heifetz with her silver purity of sound and quicksilver agility, inflected by a narrow, medium-fast vibrato. What sets her apart, however, is the gentle cushioning of her lifted strokes, her enhanced dynamic range and radiantly seductive playing during the more lyrical episodes...her finest recording yet.

This music is interesting and demanding of the listener but never off-putting. The playing requires and here receives virtuosity and a dazzling display of instrumental colouring. The soloist, Jennifer Pike - who is an exclusive artist to Chandos - plays a stunning concerto. We will surely hear much more from her.