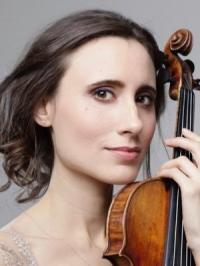 British violinist Jennifer Pike studied at Chetham’s School of Music, the Guildhall School of Music and Drama, and Lady Margaret Hall, Oxford, and came to prominence in 2002 when she won BBC Young Musician of the Year aged 12, playing the Mendelssohn Violin Concerto. Since 2011 she has recorded for Chandos Records: her discography includes French Violin Sonatas with Martin Roscoe (‘thoroughly idiomatic, glistening performances’ – Daily Telegraph), the Sibelius Violin Concerto with Sir Andrew Davis and the Bergen Philharmonic (‘one of the finest ever actual recordings’ – BBC Music Magazine), and a recital of Czech violin music with pianist Tom Poster. From 2008-2010 Pike was a BBC New Generation Artist.