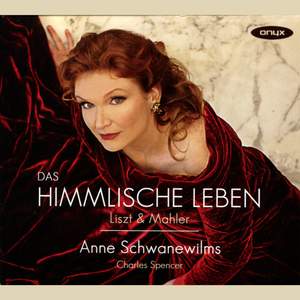 Schwanewilms's interpretations are regularly imaginative, her singing musicianly, though not all of her vocalism matches her good intentions. There's sometimes...an edge to her tone that combines... — BBC Music Magazine, May 2013, 3 out of 5 stars More…

The great German dramatic soprano Anne Schwanewilms makes her debut on ONYX with a recital of lieder by Liszt and Mahler. Schwanewilms is renowned internationally for her interpretations of Strauss and Wagner. An eminent lieder singer, Anne Schwanewilms works closely with leading lieder accompanists of our time – Charles Spencer, Roger Vignoles and Malcolm Martineau – with whom she has appeared in international concert halls in Barcelona (Gran Teatro del Liceu), Strasbourg, Madrid, Amsterdam, London (Wigmore Hall) and Washington (Kennedy Center). With Roger Vignoles, she has recorded a selection of songs by Richard Strauss, which was nominated by BBC Music Magazine as Vocal Recording of the Year 2008.

Schwanewilms's interpretations are regularly imaginative, her singing musicianly, though not all of her vocalism matches her good intentions. There's sometimes...an edge to her tone that combines with a lack of vocal substance higher up...Elsewhere her wide-ranging instrument is used with artistic insight...she brings depth and command to Mahler's 'Das himmlische Leben', nicely capturing its blend of innocence and sophistication.

Evidence of her artistry is everywhere apparent. Her phrasing is seamless, with none of the audible words-versus-music negotiations noticeable even in fine singers. Her vocal quality is not merely pure but powerful, though in her case that powers stays mostly in reserve until summoned by the music...Schwanewilms coaxes the listener into her realm with the subtlety of a whisper.

Schwanewilms's voice is an acquired taste; those who crave full-bodied Italianate lushness of tone will not 'get' the singing of this gifted German jugendlich dramatisch soprano...The words invariably come across in a refreshingly direct, unfussy manner...this is a highly pleasurable programme that can be warmly welcomed by those who crave beautifully vocalized, unusually thoughtful Lieder performances.

[Schwanewilms's] voice encompasses all the requirements for intimate lyrical songs as well the big dramatic outbursts and her tone is certainly among the most beautiful to be heard today. She has a pliable accompanist in the experienced Charles Spencer and the recording is excellent.