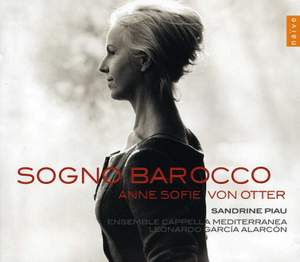 Every rhetorical device is skilfully exploited, every phrase glows...For many listeners, however, Von Otter's duets with Sandrine Piau will be the highlight. Stylistically, temperamentally and... — BBC Music Magazine, January 2013, More…

Following the best-seller 'Love Songs' with Brad Mehldau and a new recording of Berlioz’s 'Les Nuits d’été' with Marc Minkowski, 'Sogno Barocco' is the third project from eclectic Swedish mezzo-soprano Anne Sofie von Otter on naïve, which she toured 2010-11.

Dedicated to early Italian opera protagonists such as Poppea, Penelope, Diana and Helena, this clever programme gathers baroque hit duets such as “Si Dolce è’l tormento” or “Pur ti miro” and the previously unreleased Provenzale cantata or Rossi’s Lamento of the Swedish Queen . . . This delicate and subtle series of baroque jewels is performed with an amazing cast, starring French soprano Sandrine Piau, in 3 breathtaking duets, and baroque rising-star conductor Leonardo García Alarcón, one of the current darlings of Italian baroque.

This new release is offered with a 76-page booklet including complete sung texts and essays by Von Otter, Alarcón and musicologist Vincent Borel. It also includes 3 instrumental pieces by Cavalli in world premiere recordings.

the mood of this CD is pleasingly melancholy, with von Otter’s many years of experience feeding into profound readings of some lovely music

Von Otter has a whale of a time [in Squarciato appena] and the instrumentalists join in with a chorus at the end. The exuberance is reminiscent of Christina Pluhar's L'arpeggiata. The excerpts from L'incoronazione di Poppea appear out of sequence. Particularly ravishing is 'Pur ti miro', von Otter's rich but not heavy tone erotically entwined with the equally passionate soprano of Sandrine Piau...A strange disc, oddly memorable.

von Otter’s ability to reinvent herself with the passing years is something to marvel at … compelling singing and playing...in the past she has had a reputation for coolness, but there is fire in her delivery of these passionate soliloquies...She is capable of earthiness, too, in the wheedling, street-singer timbre she summons up for Provenzale's 'Squarciato appena havea'

Her voice shows little sign of wear and tear...Her still plush mezzo entwines ravishingly with Sandrine Piau’s brighter soprano, but the most remarkable parts of her “baroque dream” are Rossi’s Lament of the Swedish Queen and Provenzale’s astonishing parody of it.

Sogno Barocco is themed around female heroines of early Italian opera,
particularly those afflicted with what Francesco Cavalli, in "Vivo per Te",
calls "my resplendent pain".