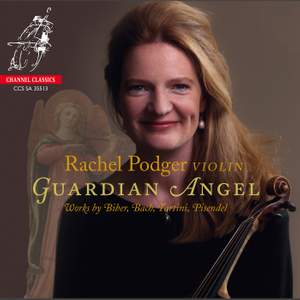 Characteristically unforced and natural, the playing manages to sound endlessly considered yet spontaneous. There's a sureness to the placing of every note, whether poised or bristling with bite... — BBC Music Magazine, December 2013, More…

Tartini: Sonata in A minor

Violinistic virtuosity was extraordinarily experimental in the late seventeenth century, with novelties in the tuning of the strings (scordaura), bowing techniques, chordal playing and contrapuntal textures (with the development of sophisticated double-, triple- and quadruple-stopping techniques) and playing in high positions. This disc of solo violin music is a real mixture of some of Rachel’s favourite pieces.

Rachel Podger is one of the most creative talents to emerge in the field of period performance. Over the last two decades she has established herself as a leading interpreter of the music of the Baroque and Classical periods. After beginnings with The Palladian Ensemble and Florilegium, she was leader of The English Concert from 1997 to 2002 and in 2004 began a guest directorship with The Orchestra of the Age of Enlightenment with whom she appeared in a televised BBC Prom in 2007. As a guest director and soloist she has collaborated with numerous orchestras including Arte dei Suonatori (Poland), Musica Angelica and Santa Fe Pro Musica (USA), The Academy of Ancient Music, The European Union Baroque Orchestra, Holland Baroque Society and the Handel and Haydn Society (USA).

Rachel directs her own ensemble, Brecon Baroque and is Artistic Director of her own festival: the Brecon Baroque Festival. Rachel is an honorary member of both the Royal Academy of Music (where she holds the Michaela Comberti Chair for Baroque Violin) and the Royal Welsh College of Music and Drama (where she holds the Jane Hodge Foundation International Chair in Baroque Violin) and teaches at institutions throughout the world.

Characteristically unforced and natural, the playing manages to sound endlessly considered yet spontaneous. There's a sureness to the placing of every note, whether poised or bristling with bite and bravado. And Podger speaks the Italian of Tartini with a native fluency...All in all, utterly 'stupendious'.

this is a remarkably beautiful recital. I doubt the solo violin has ever been more exquisitely recorded in surround. The instrument just floats before the listener within a lovely acoustic. The playing and the music itself is all gorgeous...Definitely an issue to be purchased immediately as a present to oneself with an extra copy for your closest musical friend.