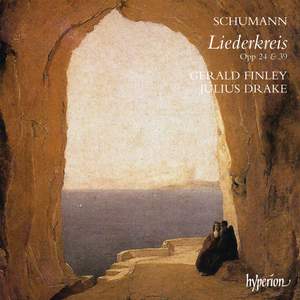 With his slow tempos and dark vowels, Finley draws from the Op. 39 Eichendorff Liederkreis a real sense of the fear lurking behind even the ecstasies of love...Drake is perfectly attuned to the... — BBC Music Magazine, Christmas 2012, 4 out of 5 stars More…

Gerald Finley and Julius Drake return to Schumann, following a magisterially intense Dichterliebe which won them a third Gramophone award. Here they focus on the two contrasting Liederkreis (‘song-circle’) cycles using texts by Heine and Eichendorff. Heine is the poet of Dichterliebe, and Op 24 contains extremes of elation and despair that call all Finley’s considerable dramatic powers into play. Eichendorff’s seductive, crepuscular ‘night-songs’ of Op 39 require the velvety tone for which this singer is equally revered. Separating these two great works are the Sechs Gedichte aus dem Liederbuch eines Malers, Op 36, which find Schumann in more homespun, folksong-influenced vein.

With his slow tempos and dark vowels, Finley draws from the Op. 39 Eichendorff Liederkreis a real sense of the fear lurking behind even the ecstasies of love...Drake is perfectly attuned to the palette of shifting colours in Finley's dark baritone - here in top form.

This new recording shows a greater richness in Finley's voice plus an evolving intimacy in his approach to recording Lieder, one that retreats from the word-by-word vocal painting of Dietrich Fischer-Dieskau...Each song's overall conception - of which Julius Drake is a key part - reflects great thought as to its core emotion.

Finley and pianist Julius Drake are well attuned to those pervading atmospheres and psychological shifts; beginning with the veiled tone with which Finley opens Op 39 every song is individually coloured (some of his inflections suggest a close study of Dietrich Fischer-Dieskau's performances), and the text is always clear.