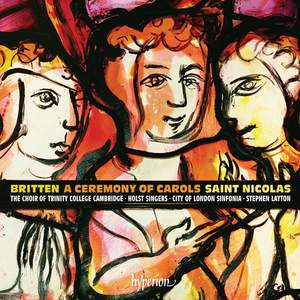 The clear-toned adult voices of the Choir of Trinity College, Cambridge, highlight qualities in the work often missed when performed by the more usual boys' choir...Perhaps Trinity sound too... — BBC Music Magazine, January 2013, 4 out of 5 stars More…

No 04a. That yongë child

II. The birth of Nicolas

III. Nicolas devotes himself to God

IV. He journeys to Palestine

V. Nicolas comes to Myra and is chosen Bishop

VII. Nicolas and the pickled boys

VIII. His piety and marvellous works

IX. The death of Nicolas

2013 sees the centenary of Benjamin Britten’s birth and Hyperion starts celebrating early with this disc of two of the composer’s most popular choral works, both with a Christmas relevance.

The cantata Saint Nicolas tells the story of the original ‘Santa Claus’, a fourth-century saint whose acts—revitalizing three boys who had been pickled by an unscrupulous landlord being among the more dramatic—led to his canonization as patron saint of children and sailors. Britten’s lively setting is distinctly operatic, full of incident and colour—with the story brought ‘home’ through the use of congregational hymns. The part of Nicolas (here sung magnificently by Allan Clayton, already acclaimed as the heir to Peter Pears and Anthony Rolfe Johnson) is one of Britten’s great heroic tenor roles.

A Ceremony of Carols is a setting for treble voices and harp of some of the medieval texts which Britten loved so much, and is heard every Christmas in cathedrals, churches and concert halls throughout the land. This fresh, sparkling performance completes a thoroughly festive release.

The clear-toned adult voices of the Choir of Trinity College, Cambridge, highlight qualities in the work often missed when performed by the more usual boys' choir...Perhaps Trinity sound too well-behaved to match the boisterous enthusiasm boys typically bring...[though] the gains in terms of technical assurance and expression make this a welcome recording of a well-loved work.

A Christmas disc to savour.

Layton's flowing speeds underline the dramatic sequence of the carols...All the solo performances are impeccably shaped and harpist Sally Pryce makes light work of the fiendish accompaniments...Clayton makes the role of Nicolas entirely his own. What a glorious voice!...This is a beautiful and deeply affecting recording.

The young ladies of Trinity College Cambridge Choir here are pleasantly smooth without becoming unctuously so. Yet neither do they lack ruggedness...Clayton is magnificent

The ladies of the choir give a polished and fresh performance with a good amount of purity of sound, while Stephen Layton keeps the tempos moving convincingly. Women rather than boys may not be to everyone’s taste but it is mightily impressive nonetheless. Meanwhile Allan Clayton makes a thoroughly excellent St Nicolas.

Layton’s soprano and mezzos affect a purity that sounds “boyish”...Clayton’s Nicolas is more youthful-sounding than his predecessors (Pears, Tear, Langridge), but Layton captures the mystery-play-like drama of the saint’s life story.

Layton’s singers do project beautifully, and their sheer security makes this Ceremony a gorgeous, invigorating experience...The moment when the adult Nicolas (beautifully sung by tenor Allan Clayton) suddenly reveals himself in The Birth of Nicolas will induce goose pimples of delight in sceptical listeners.