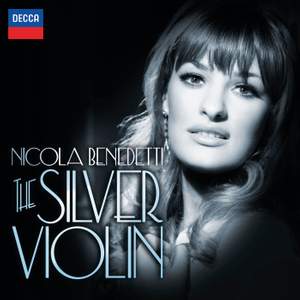 Benedetti's decision to place [the Concerto] in this particular context actually serves to enhance its musical stature. Certainly her performance is beautifully honed with a particularly atmospheric... — BBC Music Magazine, November 2012, 4 out of 5 stars More…

Shostakovich: "The Counterplan", Op. 33 - music from the film

Marianelli: My Edward & I (from "Jayne Eyre")

As a long-time champion of the lush Violin Concerto by the great stage and screen composer Erich Wolfgang Korngold, Nicola Benedetti has chosen to build a programme around his late Romantic concerto masterpiece.

This unique collection of violin classics, written specifically for the movies, includes the poignant lament from Schindler’s List.

Dmitri Shostakovich, recognised as the Soviet Union’s greatest film composer, is represented by the beloved Gadfly Romance, as well as the similarly lyrical Andante from the film The Counterplan

Benedetti's decision to place [the Concerto] in this particular context actually serves to enhance its musical stature. Certainly her performance is beautifully honed with a particularly atmospheric account of the central Andante...she has an instinctive grasp of the ebb and flow of Korngold's melodic lines and avoids the obvious temptation of becoming overtly mannered in order to intensify the musical expression.

her broadly romantic approach and genuine affection for this Hollywood-inspired concerto shine out...Benedetti is joined by star accordionist Ksenija Sidorova in a show-stopping performance which will have you on your feet! The warm acoustic of the Decca recording comes in appropriate widescreen sound.

The lush, romantic sound of Hollywood – 1930s to the present – suits her well

Benedetti decorates this repertoire with gleaming high-register pirouettes, plus vibrato throbs and hesitations that never descend into schmaltz...Such good taste is a pleasure, though her discretion can make the music paler than necessary.