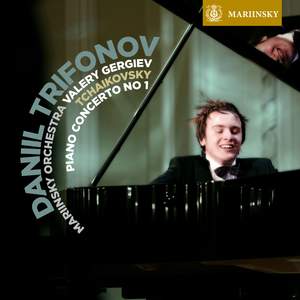 His special blend of attributes is on display here, not least his technical ease, exquisite control and rich resource of colour. In the Tchaikovsky [Concerto], Trifonov's playing ignites when... — BBC Music Magazine, December 2012, 4 out of 5 stars More…

Daniil Trifonov, winner of the XIVth International Tchaikovsky Competition, is probably the world’s most exciting young pianist. On his first Mariinsky recording he joins Valery Gergiev for a scintillating performance of Tchaikovsky’s Piano Concerto No 1. Daniil also presents a selection of recital repertoire including music by Tchaikovsky, Chopin and Liszt transcriptions of Schubert and Schumann.

Written for Nikolai Rubinstein, Tchaikovsky’s First Piano Concerto is one of his most popular works. Revised three times, including an arrangement for two pianos, the concerto was finally set in stone in 1888 and it is this version that is most frequently performed today. Tchaikovsky balances core motivic elements with a sense of lyrical spontaneity to create a technically challenging but instantly appealing work.

In 2011, Trifonov gave his debut with the London Symphony Orchestra and has since performed with the Vienna Philharmonic and the Mariinsky Orchestra, as well as touring throughout the USA, Europe and the Far East. In the coming season he will make debuts with the New York Philharmonic, Boston Symphony and Chicago Symphony orchestras, as well as performing recitals at Salle Pleyel, Carnegie Hall, Suntory Hall and Wigmore Hall.

His special blend of attributes is on display here, not least his technical ease, exquisite control and rich resource of colour. In the Tchaikovsky [Concerto], Trifonov's playing ignites when it has to, but is generally notable for its dynamic phrasing and variety of articulation. For such an overworked piece it sounds remarkably fresh.

[Trifonov] makes the instrument sing and allows the music to breathe … The six Liszt song transcriptions show him at his best, triumphantly capturing all the despair of ‘Erlkonig’ … A pianist, then, with a great international career in front of him (no doubt about that).

Last year’s winner [International Tchaikovsky Competition] 21-year old Daniil Trifonov is truly exceptional. Trifonov … the orchestral support is first-rate … Even more impressive are the solo works included here which display all the variety of Trifonov’s tonal range … Seemingly there is nothing that Trifonov cannot do. Trifonov may be at the start of his career but he is already a mature artist. His youth brings an overwhelming energy which seems to blow the cobwebs off everything he performs: he forces one to listen to these works anew, the sure sign of greatness.

Trifonov's combination of delicacy and fire leaves an indelible impression in this debut recording with the Mariinsky. The Tchaikovsky, scorching and heart-rending but never bombastic, is paired with solo Liszt transcriptions

Trifonov has won every top piano competition, and this shows why. His performance of the Tchaikovsky warhorse...is nuanced but not mannered, virtuosic without being showy, and powerful yet not hammered, as many young Russian pianists do...He has the world at his feet.