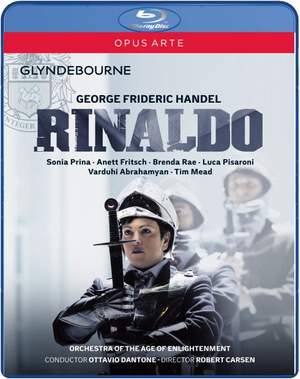 Despite major reservations about the concept, it's impossible to deny the effectiveness of the staging...All the individual performances are well-acted; the Blu-ray edition providing added detail.... — BBC Music Magazine, November 2012, 3 out of 5 stars More…

Skin-tight rubber and lacrosse sticks bring contemporary chic to this timeless fantasy of warriors and witches in Robert Carsen's fun-filled transformation of Handel's first London triumph. Conducting from the keyboard just as Handel himself did, Ottavio Dantone leads a youthful cast of today's luminaries in the dramatic art of Baroque opera, the 'affecting' Sonia Prina, the 'unadorned intensity' of Anett Fritsch and 'fire-breathing flair' (The Observer) of Brenda Rae.

Glyndebourne continues to celebrate the genius of Handel with its first staging of Rinaldo, the work with which he made his sensational London debut – and the first Italian opera specifically created for the British stage.

Rinaldo is given a contemporary new twist through the eyes of Director Robert Carsen, who made his Festival debut with L’incoronazione di Poppea in 2008.

The cast is headed by Sonia Prina in the title-role of the heroic crusader, with Anett Fritsch as his beloved Almirena, Brenda Rae as the seductive Saracen sorceress Armida, and Luca Pisaroni (last summer’s Leporello) as her duplicitous ally Argante, the King of Jerusalem.

Despite major reservations about the concept, it's impossible to deny the effectiveness of the staging...All the individual performances are well-acted; the Blu-ray edition providing added detail. Vocally, too, there are some impressive offerings...Dantone conducts a strongly characterised performance founded on the alert playing of the Orchestra of the Age of Enlightenment.

none can top the presence and authority of Luca Pisaroni’s Saracan [sic] king Argante. Directing from his tinkling harpsichord, Ottavio Dantone encourages the Orchestra of the Age of Enlightenment to be light, bright and Italian. Listen wholeheartedly; watch with caution.