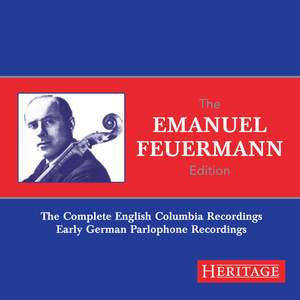 Beethoven: Variations on a theme from Mozart’s ‘Die Zauberflote’, G. 158

Rimsky Korsakov: Song of the Hindu Guest (from Sadko)

Hindemith: Scherzo for viola and cello

The first Heritage release to re-issue material from the Pearl catalogue. This 4 CD set brings together the complete English Columbia recordings and rare, early German Parlophone recordings of Emanuel Feuermann. Feuermann is the cellist’s cellist par excellence, and many would claim him as the greatest of the century. He did not however, in his lifetime, make the headway he deserved, partly because he died at such an early age and partly because he was forever overshadowed by the colossal figure of Pablo Caslas. This edition includes extensive biographical and discographical notes – an illuminating package which provides an invaluable overview of one of the most talented string players ever to have graced the stage.