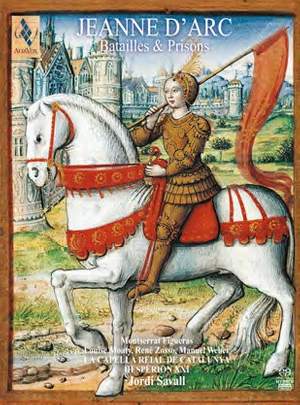 ambitious and sumptuous...this presentation has been fashioned by Savall as a piece of music theatre, and as a vivid attempt to commemmorate Joan's life it is unlikely to be bettered. — BBC Music Magazine, February 2013, 4 out of 5 stars More…

20 years after having worked on the soundtrack of Jacques Rivette’s movie “Jeanne la Pucelle”, Jordi Savall has decided to dedicate this new album to the mother figure of the struggle for French independence. Music fully enables us to rediscover this icon.

Works by composers from the time of Joan of Arc (Guillaume Dufay, Josquin Desprez, Johannes Vincenet, Johannes Cornago, etc.) but also compositions and arrangements by Jordi Savall paint the vivid portrait of a troubled time. Texts by Joan of Arc, including the record of her trial, are read in masterly fashion by French actress and director Louise Moaty.

This well-documented CD-book demonstrates how a religion prepared to compromise all its principles for political reasons also takes the risk of becoming an icon of fanaticism.

ambitious and sumptuous...this presentation has been fashioned by Savall as a piece of music theatre, and as a vivid attempt to commemmorate Joan's life it is unlikely to be bettered.

an exhaustively researched account of the story of Joan of Arc, accompanied by early-music arrangements of period compositions rendered by Hespèrion XXI. Savall strives for imaginative representation: Dufay's "Veni Sancte Spiritus" is sung by two sopranos and a countertenor, representing the voices of Saints Catherine, Margaret and Michael