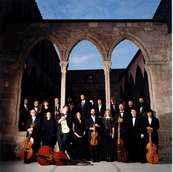 Created in Barcelona in 1987 by its conductor, Jordi Savall.

La Capella Reial de Catalunya is composed of a group of soloist singers and a top-level instrumental group (international and outstanding figures in their line), whose number varies according to the requirements of each case (8 to 60 members) and whose aim is to make the repertoire of the Catalan historical music and, by extension, that of the Hispanic and universal music, widely known all over the world.