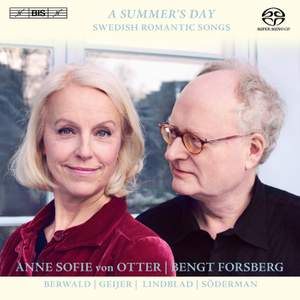 Geijer: Blomplockerskan (She who Plucked Flowers)

Geijer: Gral och allt val (Kiss and Make It Up)

Anne Sofie von Otter, accompanied by Bengt Forsberg and joined by baritone Fredrik Zetterström for two duets, performs works by four Swedish composers whose works were all composed within a century of each other.

These works provide a broad image of the early development of a Swedish Lied tradition and paved the way for the great generation of Swedish song composers, including Stenhammar, Peterson-Berger and Rangström.

The simple grace and tunefulness of Adolf Fredrik Lindblad and Erik Gustaf Geijer’s works are coupled with the works of Franz Berwald that are more intent on breaking new ground with his relatively complex songs. August Söderman, finally, searches for new forms of musical expression in his songs, with the aim to create a broader narrative with a greater dramatic force.