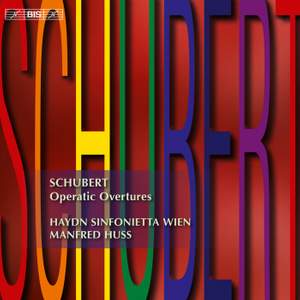 The recordings were made in 1997 for release on the Koch/Schwann label, and soon became a collectors’ item after its deletion. This re-release has been remastered by BIS Records.

Schubert’s music for the stage is much less well known than his lieder and symphonies. Although he had one of his first public successes with the Singspiel Die Zwillingsbrüder, most of his works for theatre would remain unperformed for a long time after his death, and are still rarities in the repertoire.

What wonderful music this is!...The Haydn Sinfonietta Wien plays with virtuosity and unflagging energy, featuring crisp articulation and beautiful ensemble work from each section. This is music that both conductor and orchestra clearly believe in...There is no better way to hear this still little known portion of Schubert’s genius.

The future supreme master of lieder has yet to find his feet in these often bombastic sub-Beethovian experiments but they do offer a taste of teenage Franz's burgeoning musical imagination.