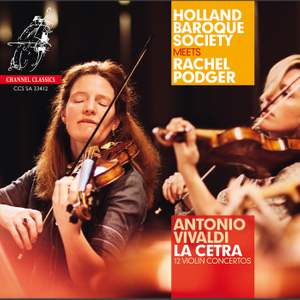 Unlike some of her continental rivals Podger's light bowing and well-judged tempos effortlessly discover the tenderly poetic content of Vivaldi's music, and here that dimension is abundant...Podger's... — BBC Music Magazine, August 2012, 4 out of 5 stars More…

Recording of the Week,  Vivaldi from Rachel Podger

After recording Vivaldi's set of Violin Concertos 'La Stravaganza', Opus 4, in 2003, Rachel Podger has been immersed in music by Mozart and Bach on disc. But it has now felt right to come back to the Venetian Maestro, whose sense of drama she adores: “This time I chose his opus 9, the set of 12 Violin concertos entitled 'La Cetra'. There are plenty of jewels in this set, just as in 'La Stravaganza', with even higher technical demands made on the soloist including many, often exotic experimental effects.”

"What I like most of all is her evident relish of the virtuoso demands that the music makes: she rises splendidly to them, making the most of Vivaldi’s extravagant writing” Gramophone: Awards 2003 (Vivaldi, 'La Stravaganza')

“Podger has one of the sweetest tones of any period-instrument violinist.” BBC Music Magazine (Bach Violin Concertos)

Unlike some of her continental rivals Podger's light bowing and well-judged tempos effortlessly discover the tenderly poetic content of Vivaldi's music, and here that dimension is abundant...Podger's playing radiates expressive warmth and we can only delight in the spontaneous rapport that she feels with the mature idiom of these wonderful concertos.

The music world is inestimably the better for Rachel Podger...Everything she touches comes to life in a way that is not only satisfying musically but also representative of the human spirit at its most vital...Podger reveals unexpected depth and variety of expression in the music...Podger wears her virtuosity lightly, and the relationship with the Holland Baroque Society players is clearly one of mutual inspiration.

This is really attractive music to listen to, and with performances as full of vitality as these there is something immensely satisfying for the listener. Everything is carefully and beautifully phrased, and you sense a real chemistry between Podger and Holland Baroque Society...they bring a real energy and drive to the performances, while clearly listening and responding appropriately to every subtle nuance which Podger inflects in this music.

The variety of Op 9 astounds the ear, especially in these feisty readings, which emphasise the folksy roots of the dance movements and lend them an almost funky modernity. The highlight here is the B flat major double concerto — with Judith Steenbrink as second soloist

Personality and charisma can easily be found in Rachel Podger’s account of Vivaldi’s violin concertos...the elegant energy in her phrasing is adorable...contrasts are vivid, the drama is considerable, and the orchestra’s sonic tapestries bring their own special joy.