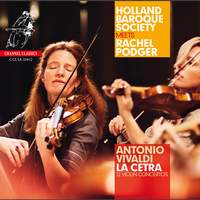 Rachel Podger's recording of La cetra was released on Channel Classics on 25th June, and praised in The Times for the 'personality and charisma' of her playing as well as the 'special joy' provided by the orchestral playing.