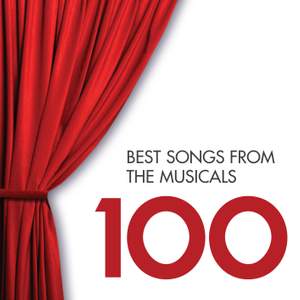 Lloyd Webber, A: Music Of The Night

Loewe, F: Wouldn't It Be Loverly (From 'My Fair Lady')

Lloyd Webber, A: Any Dream Will Do (from Joseph and the Amazing Technicolor Dreamcoat)

Porter, C: Anything Goes, Act I: I Get a Kick Out of You

Loewe, F: If Ever I Would Leave You (Camelot)

Elton John, Tim Rice: Can You Feel The Love Tonight (From 'The Lion King')

Rodgers, R: You Are Beautiful

Loesser: Standing on the Corner (From 'The Most Happy Fella')

Berlin, I: Annie Get Your Gun, Act I: They Say It's Wonderful

Sondheim: Comedy Tonight (From A Funny Thing Happened on the Way to the Forum)

Alan Menken, Tim Rice: If I Can't Love Her

Lloyd Webber, A: Don't Cry For Me Argentina (from Evita)

Bart: As Long As He Needs Me

Porter, C: Anything Goes, Act I: You're The Top

Porter, C: Kiss Me, Kate, Act II: Where is the Life That Late I Led?

Bernstein: New York, New York (from On the Town)

Rodgers, R: I Enjoy Being a Girl

Kern: Roberta, Act 2: "Smoke Gets in Your Eyes"

Jerry Bock, Sheldon Harnick: Ice Cream (From 'She Loves Me')

Loesser: Once in Love with Amy

Berlin, I: Annie Get Your Gun, Act I: My Defenses Are Down

Herman: Tap Your Troubles Away

Bart: You've Got to Pick a Pocket or Two

Berlin, I: Annie Get Your Gun, Act II: I Got the Sun in the Morning

Send in the Clowns

Herman: Wherever He Ain't

Berlin, I: Annie Get Your Gun, Act I: There's No Business Like Show Business

Rodgers, R: Falling in Love with Love (The Boys from Syarcuse)

Berlin, I: Annie Get Your Gun, Act II: Anything You Can Do

Kern: Very Warm for May, Act 1: "All the Things You Are" (Ogdon Quiler, Liz Spofford, Carroll, Charles)

Loewe, F: Brigadoon: The Heather on the Hill