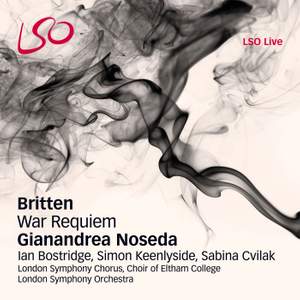 [Noseda] delivers it afresh as a scintillating achievement...Sabina Cvilak's soprano has the focus, though not always the required gravitas, while tenor Ian Bostridge brings a piercing sincerity... — BBC Music Magazine, June 2012, 4 out of 5 stars More…

iii. Requiem Aeternam - "What passing-bells for these who die as cattle?"

viii. Dies Irae - "Out there, we've walked quite friendly up to Death"

xiii. Dies Irae - "Move him into the sun"

xvii. Offertorium - "So Abram rose, and clave the wood"

xx. Sanctus - "After the blast of lightning from the East"

xxii. Libera Me - Libera me

xxiii. Libera Me - "It seemed that out of battle I escaped"

xxv. Libera Me - "Let us sleep now…" In paradisum

xxvi. Libera Me - Requiescant in pace

Gianandrea Noseda leads an Italianate performance of Britten’s great depiction of ‘the pity of war’, with the London Symphony Orchestra and Chorus and soloists Sabina Cvilak, Ian Bostridge and Simon Keenlyside.

For his first LSO Live recording, Gianandrea Noseda is joined by three of today’s most widely acclaimed singers for a magnificent performance of Benjamin Britten’s choral masterpiece.

Premiered 50 years ago on 30 May 1962, the 'War Requiem' was commissioned for the re-dedication of Coventry Cathedral, which was destroyed by bombing raids during the Second World War.

Using the Latin mass of the dead, interspersed with texts by war poet Wilfred Owen, Britten, a pacifist and conscientious objector, created a work that both mourned the dead and pleaded the futility of war. The 'War Requiem' was to become one of the defining choral works of the 20th Century.

Gianandrea Noseda was the first foreign Principal Guest Conductor of the Mariinsky Theatre in St Petersburg and over the past decade his reputation in the opera house and concert hall has blossomed. He regularly conducts the LSO, as well as many of the world’s other great orchestras, and is Music Director of the Teatro Regio in Turin.

Ian Bostridge, Simon Keenlyside and Sabina Cvilak perform regularly in the world’s leading opera houses and are renowned for their performances in Britten’s music. The LSO and LSC have both enjoyed long relationships with the composer and appeared on the first recording of the 'War Requiem', conducted by Britten himself.

'Noseda’s unashamedly dramatic interpretation held the audience transfixed. It was all so vivid … an overwhelming evocation of the grief, the waste and the pity of war’ The Times (UK)

High resolution recording, live at the Barbican in October 2011

‘Noseda marshalled the finest War Requiem that I have heard'

[Noseda] delivers it afresh as a scintillating achievement...Sabina Cvilak's soprano has the focus, though not always the required gravitas, while tenor Ian Bostridge brings a piercing sincerity to all his solos...Keenlyside takes a different approach: sonorous, commanding, but sometimes lacking the necessary bitter edge...Nevertheless, this is an important issue: Noseda's judgement of pace is unerring, and the orchestra and chorus simply superb.

The LSO and its Chorus are on cracking form, and the soloists are as good as you will get…No one should be without the composer’s recording, also with the LSO, but half a century later, Noseda’s Dramatic, pulsating account represents another landmark.

Noseda's live performance seeks to take the audience on a journey from the edge of consciousness to the blazing fires of the battlefield...Bostridge spins a beautiful line in the tenor's lyrical passages...Keenlyside is excellent throughout...Decisive and confident, the soprano Sabina Cvilak has the Slavic edge to her voice that has seemed hard-wired into the part since the incomparable Vishnevskaya

Noseda offers an account rich in drama...forging a sense of momentum and cohesion..Few singers deliver text with as much conviction and engagement as Bostridge, who finds the right tone for the bitterness of war...[Keenlyside] sounds every inch the soldier, conveying the pain of war and a bleak sense of loss...Cvilak is very good, particularly fine in floating her high notes in the 'Lacrimosa'..this performance is incredibly moving

the LSO Live account has great clarity and tonal sophistication. The Eltham choir is crisp and well balanced...The LSO certainly play well and the brass in the Dies irae are especially thrilling...All else pales next to Bostridge’s deeply moving, extraordinarily nuanced singing in Futility...The LSO chorus deserve a mention in dispatches. Their quiet singing in Pie Jesu is ineffably beautiful.

Noseda gives no indication of being a mere stand-by, and I particularly like the way that he brings an Italianate sense of theatricality to this work, heightening the inherent drama of the piece in a way that reminded me in several places of the Requiem setting by Giuseppe Verdi...a deeply moving account of this thought-provoking piece.

Noseda proves a more than worthy substitute [for Colin Davis], easily encompassing the dramatic scale of the work...Sabina Cvilak has a bright, silvery penetrating timbre. Ian Bostridge’s tenor is as individual and idiosyncractic as Pears’s in its own way. Simon Keenlyside, too, is magnificent, while the two choirs relish their grateful, inspiring music.

[Noseda] brings a strong sense of Italianate lyricism to bear on the score, reminding us of Britten's conscious debt to Verdi's Requiem. The choral singing is fervent and intense, the playing fierce and sensitive by turns. Sabina Cvilak is the thrilling, hieratic soprano, though her male counterparts

the two-CD set certainly captures the thrill of the moment in a reading notable both for its hushed intensity and dramatic sweep. Noseda’s an Italian, after all, and the clamorous Dies irae and supercharged choral prayers wouldn’t disgrace a Verdi opera...The LSO and the London Symphony Chorus are the performance’s rock: they start on top form and stay that way. Another essential recording, with or without the Britten centenary.

Noseda conducts the most blazing War Requiem I have heard in any circumstances...The LSO’s brass section rips into the score’s martial elements with full-blooded ferocity...This is a searing recording, a match for the very best and more powerful than any other version I know in communicating Britten’s anti-war agenda. Fifty years on, here is a War Requiem for our own troubled times.

In some ways this is the most affecting and emotionally draining reading the work has ever received — and that includes the premiere recording by Britten itself, which established a high benchmark for many years. This is a considerable achievement.