Of all the musical masterpieces of the twentieth century, a work that must surely rank highly on anyone’s list is Benjamin Britten’s War Requiem. It was commissioned for the reconsecration of Coventry Cathedral (just up the road from us here in Leamington Spa!), which had been more or less destroyed by a German bombing raid in 1940, and was first performed on the 30th May 1962. The pacifist Britten came up with the ingenious idea of interspersing the Latin text of the Requiem with poems by the celebrated First World War poet, Wilfred Owen, and even after fifty years the piece has lost none of its ability to shock us, to move us, and to force us to contemplate the nature of war and sacrifice. 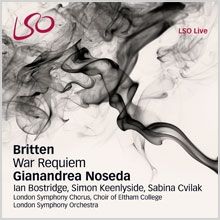 To celebrate the fiftieth anniversary of its composition, we have been treated to a new recording on LSO Live, with the Italian conductor, Gianandrea Noseda. Although he was a replacement for Sir Colin Davis, who had to withdraw owing to ill health, Noseda gives no indication of being a mere stand-by, and I particularly like the way that he brings an Italianate sense of theatricality to this work, heightening the inherent drama of the piece in a way that reminded me in several places of the Requiem setting by Giuseppe Verdi.

Perhaps nowhere is this more true than the thunderous brass interjections at the start of the Dies Irae, which pack quite a punch and are fantastically apocalyptic in their power (for me, there’s nothing quite like the LSO brass section in full flow!). The contribution from the chorus is also largely excellent, especially in this movement, where the opening lines are sung in a kind of half-hiss/half-whisper, but when their full force is finally unleashed for the Tuba mirum, the effect is quite terrifying indeed! They have clearly been prepared extremely well, and I was very impressed by their discipline and precision in tricky passages that can easily descend into rhythmic chaos (such as Confutatis maledictis and Sed signifer sanctus Michael).

Soloists, too, are on top form. I had expected this to be ideal repertoire for Ian Bostridge and I wasn’t disappointed: he has just the right kind of plangent sound and his diction is, as usual, pretty much perfect. Similarly, the marvellous Simon Keenlyside’s first entrance, Bugles sang, saddening the evening air, is wonderfully sung (coupled with some fine solo horn playing from Timothy Jones). Both male soloists kept me captivated at every stage, but perhaps their finest hour is their duet in the Offertorium, where Britten sets Owen’s The Parable of the Old Man and the Young, which tells of Abraham’s intended sacrifice of his son, Isaac. The moment where they sing of the angel appearing in order to prevent the sacrifice is simply ravishing, and sends a shiver up my spine every time I hear it.

I must admit that the soprano soloist, Sabina Cvilak, was previously unknown to me, but I’m pleased to say that she provides the requisite heft for the Liber scriptus, as well as plaintive tenderness in the Lacrimosa. Finally, special mention must go to the boys of the Choir of Eltham College with their brief but crucial contributions. Having played in performances of this piece myself where the boys’ choir has been somewhat less than stellar in quality, I always feel a certain amount of trepidation as we approach their first entrance, Te decet hymnus, but I needn’t have worried on this occasion; they are reassuringly secure and full in tone throughout.

In a letter to his sister after the première, Britten somewhat modestly said, “I hope it’ll make people think a bit”. This recording certainly does that. Obviously, lovers of this piece will already have Britten’s own version, made soon after the first performance and also with the LSO, but this new one is, I think, equally fine, and offers a deeply moving account of this thought-provoking piece. 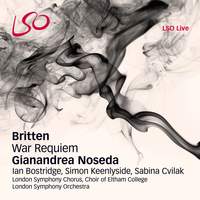