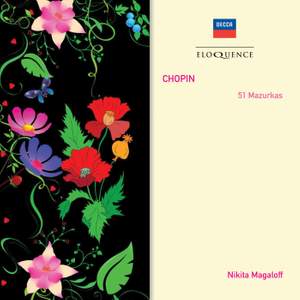 The Chopin Mazurkas explore so many emotions, veering from one to another so rapidly ; their fully satisfactory performance is recognised as a feat most difficult of achievement by any pianist.... — Gramophone Magazine More…

Chopin’s mazurkas are unique in that they occupied him throughout the course of his career as a composer. He wrote nearly sixty of them. The first was written when he was still a teenager, and the last was written in 1849, the year of his death. By the time he had completed the four mazurkas that comprise Op. 6 – the first set to be published during his lifetime – Chopin had already mastered the form; subsequent mazurkas merely confirmed his genius. Pianist Charles Rosen wrote, ‘Of all the short works of Chopin it is the mazurkas that capture the full range of his genius.’

Released to mark the centenary of the Georgian-born pianist Nikita Magaloff’s birth, these recordings were made over a period of seven months (May-November 1956) in Geneva’s Victoria Hall (a hallowed Decca recording venue). This is their first international CD release on Decca. Magaloff recorded the Mazurkas again for Philips several years later, but it is these early Decca recordings that are the most prized.

The Chopin Mazurkas explore so many emotions, veering from one to another so rapidly ; their fully satisfactory performance is recognised as a feat most difficult of achievement by any pianist. Magaloff goes a great deal of the way towards bringing it off, and exhibits in the course of the fifty-one pieces very many happy turns of phrase, and also of pianistic effect […] Op. 6 No. 3, for example, being delightful in its vivacity and rhythmic point, while Op. 33 No. 1 has just the right sort of fragile charm […] Magaloff certainly implies the true measure of Op. 50 No. 3, brings a proper strength to Opp. 50 No. 1 and 56 No. 2, while in Opp. 56 No. 3 and 59 No. 1 he compels admiration