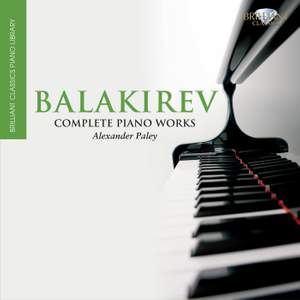 has this music in his soul. He plays with a crispness and clarity that is vital in this repertoire. Even though the recordings were made almost two decades ago, they remain fresh and worth hearing.... — MusicWeb International, April 2011 More…

Balakirev: Reminiscences of Glinka's opera 'A Life for the Czar'

Balakirev: Nocturne No. 1 in B flat minor

Balakirev: Nocturne No. 2 in B minor

Balakirev: Nocturne No. 3 in D minor

Balakirev: Impromptu on the themes of two Preludes by Chopin

Balakirev: Waltz No. 2 in F minor

Balakirev: Waltz No.4 in B flat

Balakirev: Mazurka No. 1 in A Flat

Balakirev: Mazurka No. 3 in B minor

Balakirev: Mazurka No. 5 in D

Balakirev: Mazurka No. 6 in A Flat

Balakirev: Scherzo No. 1 in B minor

Balakirev: Scherzo No. 2 in B flat minor

Balakirev: Scherzo No. 3 in F-Sharp Major

Balakirev: Au jardin (In the Garden) in D-Flat Major

Balakirev: Gondellied in A Minor

Balakirev: Novelette in A

Mily Balakirev (1837-1910) was the founder of the group of Russian composers called ‘The Mighty Handful’. Together with Borodin, Rimsky Korsakov, Cui and Mussorgsky he helped create a distinctive Russian school of music that was not reliant on the influence of the Austro German school.

Studying at the St Petersburg Conservatoire, he won the praise of Glinka, and had an influence on the young Tchaikovsky. He wrote two symphonies, two piano concertos, several symphonic poems and many piano works. On these 6CDs his entire output for piano can be found.

A superb pianist, he produced one of the most taxing works ever written for the instrument, his Oriental Fantasy Islamey. His piano sonata is no less impressive, and the Seven Mazurkas are wonderfully melodic works. There is much to discover on these discs. Sadly, Balakirev suffered a complete nervous breakdown in 1871, and he withdrew from life, eventually emerging to take up a minor management role on the railways.

In 1876 he began to compose again, and in 1883 was appointed as director of the Imperial Chapel. He retired in 1895, and continued composing, but by now considered old fashioned and was forgotten even by his old friends. However, one young composer, Igor Stravinsky had a soft spot for him, and pitied him as he suffered from bouts of depression.

has this music in his soul. He plays with a crispness and clarity that is vital in this repertoire. Even though the recordings were made almost two decades ago, they remain fresh and worth hearing. Adding to the enjoyment is a good set of notes, including personal comments by the performer about each piece.