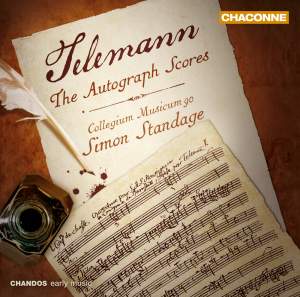 CM90, as usual, are gently bright and stylish. The orchestral sound is not the full-bodied one of continental Telemann-frequenters such as the Freiburg Baroque Orchestra or the Akademie fur Alte... — Gramophone Magazine, July 2012 More…

Collegium Musicum 90 was founded by Simon Standage and the late Richard Hickox in 1990, and is today a well-established ensemble for the performance of baroque and classical music, with a repertoire ranging from chamber music to large-scale works for choir and orchestra. As an exclusive Chandos artist, the ensemble has recorded more than fifty CDs for the label, which includes nine discs of instrumental music by Telemann. In recognition of the success of the Telemann series in promoting the reputation of the composer, Simon Standage was awarded the Georg-Philipp-Telemann-Preis in 2010.

The works presented here all survive in autograph scores, or have autograph connections. Today only eighteen such scores of instrumental music survive from Telemann’s long and prolific career as a composer, and nine of them are included in a collection that belonged to his grandson Georg Michael Telemann.

The Ouvertures-Suites in F major and D major, as well as the Divertimento in E flat, form part of this autograph collection, and were composed by Telemann in the 1760s when he was in his eighties, for His Highness the Landgrave of Darmstadt, Ludwig VIII. In a letter that accompanied the scores, Telemann wrote that he had given up composing due to his deteriorating eyesight, but upon reading in the newspaper of the Landgrave’s approaching name day, he ‘became filled with enthusiasm and made a draft for the enclosed works’.

The Concerto in D major belongs to an earlier period in Telemann’s life, as does the Ouverture-Suite in A major. Both these works present less of a direct link to the composer. The Concerto survives only in parts, and the personal touch by Telemann is provided by a correction in the surviving parts. The Ouverture-Suite is one of comparatively few ouvertures-suites by Telemann in which a solo instrument (in this instance, a solo violin) plays a prominent role throughout. There are currently some doubts about the authenticity of the handwriting in the score.

CM90, as usual, are gently bright and stylish. The orchestral sound is not the full-bodied one of continental Telemann-frequenters such as the Freiburg Baroque Orchestra or the Akademie fur Alte Musik Berlin but is blessed with an airy, sunny clarity of its own, joined to alert and agile ensemble playing, especially from the strings.

With performances and recordings which seem unimpeachable, this ongoing Chandos project can only enhance the Telemann cause; this CD is well worth sampling even if you're unfamiliar with this music...Fine playing and recorded sound, with erudite booklet notes and visual presentation of the highest quality, impart further lustre to an already widely acclaimed series.

Late works by an elderly gent these may be, but they show a close affinity with the fashionable French style demanded by his patron, and Telemann’s typical refinement and liveliness is ever-present...Collegium Musicum 90’s performances are spirited and beautifully crafted.