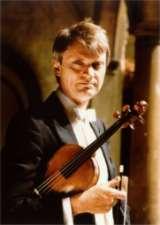 Simon Standage is well-known as a violinist specialising in seventeenth and eighteenth century music. Leader and soloist with The English Concert from its foundation until 1990, he also fulfilled the same role for many years with the City of London Sinfonia. As well as the many records he made with The English Concert (including Vivaldi's The Four Seasons, nominated for a Grammy award), he also recorded solo and chamber music - including all of Mozart's violin concertos - with the Academy of Ancient Music, of which he was, with Christopher Hogwood, Associate Director from 1991 to 1995.