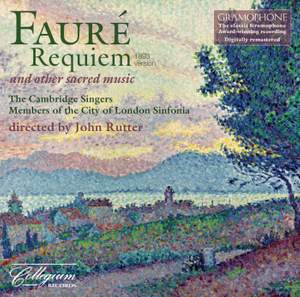 and other sacred music

The Cambridge Singers & Members of the City of London Sinfonia, John Rutter (director)

2010 sees the re-release at mid-price of John Rutter’s Gramophone Award-winning 1984 recording of Fauré’s Requiem. The first-ever performance on disc of the work in its intimate original version – famously re-discovered by Rutter in the Bibliothèque Nationale in Paris after a century of neglect – it remains one of the timeless jewels in the crown of the Collegium catologue. Hailed on release as ‘the Fauré Requiem of the future’ (Music Week), Rutter’s performance with the Cambridge Singers and members of the City of London Sinfonia has transformed the way in which we view one of the great works of European sacred music, and remains definitive.

The medium-scale 1893 version of Fauré's spiritual masterpiece finds a loving advocate in John Rutter, with excellent soloists and a lucid-toned choir.

Faure's Requiem has received many fine recordings, but John Rutter's inspired reconstruction of the original 1893 score, using only lower strings and no woodwind, opened our ears to the extra freshness of the composer's first thoughts.