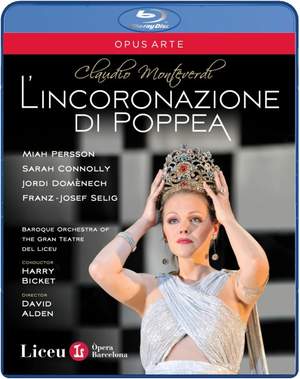 this Barcelona interpretation by [Alden] is almost Brechtian in the spare objectivity of its stage set, and Expressionist in its use of the shadowy, zombie-like figure of Time that shuffles across... — BBC Music Magazine, July 2012, 4 out of 5 stars More…

Love conquers all – ruthlessly and irresistibly – as Emperor Nero and his mistress Poppea remove the obstacles to their union. At Barcelona’s Gran Teatre del Liceu David Alden’s visually sumptuous production, with its suggestions of a giant game of chess, puts the opera’s potent blend of sex and politics in a context that sets ancient against modern– just as the action juxtaposes scurrilous comedy and stark drama. Monteverdi’s magnificent score, meanwhile, accommodates intrigue, wit, nobility, tragedy and sensuality, and, led by the intense Sarah Connolly and the delectable Miah Persson, the cast brings both drama and music startlingly to life.

Bicket says of Poppea, 'this is one of the best librettos ever written for an opera.'

Extra features include an illustrated synopsis and cast gallery.

this Barcelona interpretation by [Alden] is almost Brechtian in the spare objectivity of its stage set, and Expressionist in its use of the shadowy, zombie-like figure of Time that shuffles across the back of the stage...Persson is a superb Poppea who can really act with her voice but whose body seems constrained by the direction...The orchestral accompaniments are nicely varied.

a punchy 2009 performance of distinctively dark musical colouring...Nothing is overly camped up - even Dominique Visse in loud, bra-flashing drag...The whole is acutely paced and supported by Harry Bicket's orchestra, thei performance a reminder of how much progress has been made in the realisation of early Venetian opera in the last half-century...The hand-picked European cast is in fine fettle, Connolly's Nero outstanding