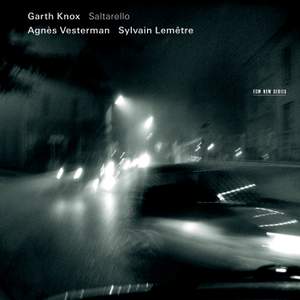 Bringing all this music seamlessly together are the remarkable sonic possibilities offered by the combination of cello and viola or viola d'amore. A fiddle and electronics are added for good... — Gramophone Magazine, September 2012 More…

Music For A While

Garth Knox is one of the most versatile and audacious string players today, a member of the famous Arditti Quartet for eight years and a virtuoso viola soloist, he is now a leading exponent of the viola d’amore (the rare instrument from the Baroque era with seven playing and another seven resonating strings that allow for a particularly full and warm sound). On Saltarello he plays both instruments, as well as the fiddle, in an astonishing range of music spanning 1000 years.

From opposite ends of this timescale are Hildegard of Bingen’s Ave, generosa, a song of praise to the Virgin Mary, and Vent Nocturne, pieces for viola and electronics written for Knox by Kaija Saariaho. The adventurous programme also brings in Guillaume de Machaut, John Dowland and Purcell, a concerto for viola d’amore by Vivaldi, and a new work for solo viola by Garth himself, plus his captivating arrangements of 14th century dances and traditional Celtic tunes (he was born in Ireland and raised in Scotland). Sounds and feelings resonate across the centuries…

Knox comments: “Each of my instruments – medieval fiddle, viola d’amore and viola – brings its own perspective and sound world to the chosen pieces, and is complemented by its corresponding partner (fiddle/percussion, viola d’amore/cello and viola/electronics). The aim was to ‘bring back’ the pieces to the present day and to explore them here and now without destroying their inherent qualities.”

He is joined for different pieces by percussionist Sylvain Lemêtre or French cellist Agnès Vesterman. She also contributed to his previous “hypnotic” recital for ECM, D’Amore (4766369), named as Gramophone’s ‘Disc of the Month’ in September, 2008.

Bringing all this music seamlessly together are the remarkable sonic possibilities offered by the combination of cello and viola or viola d'amore. A fiddle and electronics are added for good measure but it's the massive range and depth of beauty of just these two instruments playing together that is at the heart of the recording.

Knox’s recital trades on the comparisons to be made between the delicious melancholic tints of the viola, the more silvery tones of the viola d’amore and the biting honesty of the fiddle.