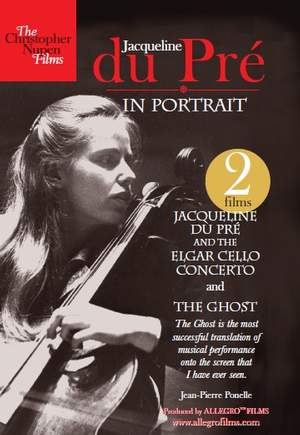 Jacqueline du Pré and the Elgar Cello Concerto and The Ghost

This is a re-issue, in an improved version, of Christopher Nupen’s best-selling DVD — previously released through Opus Arte it now appears on the Christopher Nupen Films label for the first time.

As usual with Christopher Nupen DVDs, this one contains two films: the famous portrait film of Jacqueline du Pré — which includes the complete Elgar cello Concerto in a performance which has become legendary — and a performance film, The Ghost (Beethoven’s Trio Op. 70 No. 1) with Daniel Barenboim and Pinchas Zukerman; described by the French opera and film director Jean-Pierre Ponnelle as the most successful translation of musical performance onto the screen that he had ever seen.

And, also as usual with Christopher Nupen films, these are lit, shot and edited in the style of cinema film, not television. The results are visually impressive and totally unlike what usually appears on television screens — an important, defining characteristic of this DVD.

These two films remember the artistic persona of one of the most charismatic and best loved performing musicians of the 20th century and in the way that film can do better than any of the other media. They were made at the high point of Jacqueline du Pré’s tragically short career.