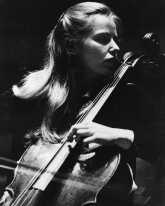 Born in Oxford, Jacqueline du Pré is acknowledged as one of the greatest cellists who ever lived. She had a successful career until the onset of the multiple sclerosis which eventually led to her tragically early death.