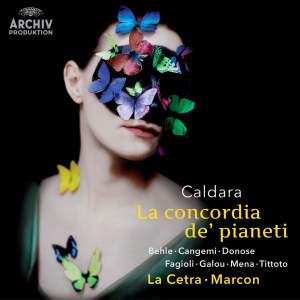 This release marks the world-premiere recording and rediscovery of Antonio Caldara’s La Concordia de’ pianeti, a musical serenade of operatic magnitude composed for the court of Austrian Emperor Karl VI, featuring the crème de la crème of the day’s singers, including the legendary castrato Carestini.

Unearthed and edited by Andrea Marcon, the piece offers a series of virtuosic arias, breath-taking cantilenas and ethereal duets performed by some of the finest singers of today.

Franco Fagioli and Daniel Behle, two of today’s hottest vocalists, lead a distinctive cast of early music “shining stars”, including soprano Veronica Cangemi in a welcome return to Deutsche Grammophon / Archiv. The dynamic La Cetra Barockorchester, one of the most coveted period ensembles active today, lends an idiomatic touch to the program.

This is a major new release under the Archiv imprint featuring a world-class cast of singers. The opera is new to the repertoire and the catalogue altogether and has been recorded both in studio conditions and live performances in Dortmund.

Marcon conducts with crisp authority, giving high definition to the composer's motifs and rhythms. As Diana, Veronica Cangemi delivers eye-popping variations on her da capo arias's first section...The instrumentalists are evem more impressive...Overall, this is a glorious recording, showing how Caldara's music can unleash the imagination of its performers.

La Cetra's relaxed trumpet flourishes, nonchalant rhythmical inegales and timely thundering timpani during the Introduzione instantly establish the attractiveness of Caldara's music...There might be more engrossing works than this one that still await rediscovery but there's no disputing the qualities of Andrea Marcon's crisply directed performance.

Most people will likely be drawn to it by the thought of the cult countertenor Franco Fagioli as Apollo. He’s suitably flamboyant, though the best performances are Delphine Galou’s infinitely gracious Venus, Carlos Mena’s waspish, nicely understated Mars and Luca Tittoto’s warmly avuncular Saturn. A fine recording of a well-nigh impossible work.

The music doesn’t have Handel’s variety, but it is zestily performed by La Cetra Barockorchester and top soloists including the countertenor Franco Fagioli, reaching improbable heights.