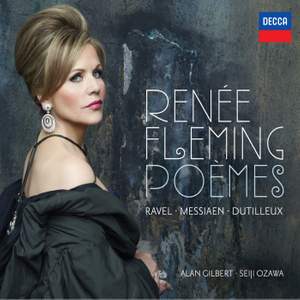 Always a strong Francophile, she makes an inspired exploration for the still-developing French tradition...it is easy to hear what inspired [Dutilleux]...Her lower register has become ever-richer... — BBC Music Magazine, May 2012, 5 out of 5 stars More…

David casts his ear over recordings of Messiaen, and picks out some particular gems.

As the sensual centrepiece of an album of 20th century French vocal masterpieces, Renée Fleming makes her first-ever recording of Ravel’s ravishing Shéhérazade.

A trio of major works is completed by one written for Renée Fleming by the doyen of French composers, Henri Dutilleux – his dramatic Le Temps l’horloge.

The album is completed by two earlier songs by Dutilleux, specially-orchestrated for this album and recorded in the presence of the composer.

Always a strong Francophile, she makes an inspired exploration for the still-developing French tradition...it is easy to hear what inspired [Dutilleux]...Her lower register has become ever-richer toned, yet fluid, while higher up her silken soprano remains undiminished...Fleming is utterly ravishing in Ravel's Sheherazade, and her performance of Messiaen's Poemes pour Mi is sensational.

[in the Ravel] she revels in the storytelling...her warm, voluptuous tones soaring ecstatically up into the most hedonistic climaxes, and carrying effortlessly over the orchestra even when in her softest lower-tessitura pianissimo....It’s the Dutilleux cycles that work best of all though, nodding as they do to all of Fleming’s vocal and expressive strengths...the vocal lines themselves playing to the warmth and elasticity of her upper register.

The outstanding item in this French collection is the first recording of Dutilleux's Le temps l'horloge. The short cycle of four songs with interlude was composed with Renee Fleming's voice specifically in mind and she revels in its rapturous lyricism...Fleming's soprano soars and dips, hinting at great truth always just out of reach.

Fleming is at her considerable best in [the Dutilleux], with her voice sounding rich and wonderfully flexible...the Dutilleux makes this an important release that will be an essential purchase for many French music enthusiasts

the voluptuous Ravel songs (underpinned by some fantastically atmospheric orchestral playing) showcase smoky, almost mezzo-ish tints which I hadn’t heard from this singer before, and the powerhouse Messiaen songs are delivered without a hint of strain at either extreme of their large dynamic and tonal range.

Given that Fleming celebrated 50 years in 2009...the state of her voice is cause for wonderment. The plush, peachy tone, her trademark, sounds unimpaired by the years...The American soprano justifiably revels in the sound of her own voice. If there have been more Gallic Shéhérazades on disc, none is more beautifully sung.

Renée Fleming's latest album reminds us that we pigeonhole her at our peril...Her artistry...can be formidable: she makes Shéhérazade sound faintly indecent; Poèmes pour Mi taxes her a bit, but is suitably ecstatic. But it's in the Dutilleux that we find her at her considerable best. It's worth acquiring just for that.

Fleming claims that singing in French suits her voice naturally, which is clear on this album...Her involvement with the intoxications of Ravel's Shéhérazade is obvious, the journey into this "forest filled with mystery" navigated with an enchantment little short of thrilling. Messiaen's Poèmes Pour Mi proves
the perfect partner for Shéhéraza

Shéhérazade finds Fleming in seductive voice...Dutilleux provides an appealing series of soundworlds that suits the warm sumptuousness of her voice.

Fleming’s immaculate French diction is an asset, and Dutilleux’s luminous orchestral colours gleam under Seiji Ozawa’s direction. No effect is overplayed...Good to see that a major label is still willing to promote high-quality, offbeat repertoire – snap this disc up before it gets deleted.