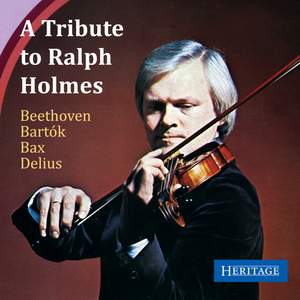 A Tribute To Ralph Holmes

Aided by the crisp playing of Peter Dickinson, he gives a winningly fresh account of Beethoven's Spring Sonata, with a slow movement movingly delivered in hushed tension, a beautifully sprung... — Gramophone Magazine, May 2012 More…

Ralph Holmes was one of the leading violinists of his generation. This release aims to supplement the small Holmes repertoire on CD and catch him at the height of his powers. With the exception of the Bartok (which appears here courtesy of Decca), the performances were made for the BBC in the 1980s and are previously unpublished, displaying Holmes’ versatility as an artist.

Aided by the crisp playing of Peter Dickinson, he gives a winningly fresh account of Beethoven's Spring Sonata, with a slow movement movingly delivered in hushed tension, a beautifully sprung account of the brief Scherzo and free-flowing accounts of the outer movements...Holmes plays [the Bartok] with seeming ease...every note is crystal clear, making evident Bartok's mastery...Altogether, a splendid tribute to Holmes.

their performance is a zestful and dazzling rediscovery of a familiar masterpiece … enchantingly done.

These previously unreleased BBC recordings and a CD transfer remind us of an illustrious British violinist who died tragically young (1937-84). The account of Beethoven’s “Spring” Sonata, Op 24 in F, has a brilliant, soaring freshness...the interpretative intensity [in the Bartok] is powerful.

This is not the way Beethoven's Spring Sonata is played today. The portamento displayed in this BBC Radio Stoke recording of 1981 performance may horrify some, but the warmth of sound and acute phrasing must delight...A joy for nostalgists.